Beer of the Week - Hasseroder Pilsner 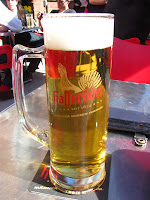 Thursday I stopped at the Bier Mrkt on King West to sit on their great patio, have a pint or two and read a book.

On tap they had a beer that is new to Canada, Hasseroder Pilsner from Hasseroder Brewery in Germany.

I could not find out much about the brewery except that it was originally opened in 1872 in Wernigerode, Germany, and in 2003 was acquired by the Anheuser–Busch InBev empire. I saw pictures of Wernigerode and what a beautiful place. One day I want to go to Oktoberfest in Germany. If and when I do, I want to take a side trip here.

As usual for the Beer Mrkt, my server, Kati,e was friendly and quick in bringing me my beer. 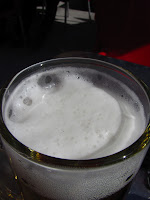 The beer was light yellow in colour and fairly clear. I had no trouble seeing through it. It did have a great frothy appetizing head on it which dissipated slowly.

It was good and refreshing. Much better than the lagers and pilsners we have here but not outstanding for a European or Germain pilsner. It did hit the spot for a very warm May afternoon but really was nothing special.