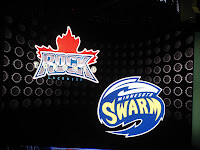 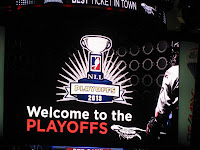 This afternoon the 7-9 Minnesota Swarm came into town to play the top seeded Toronto Rock in a sudden death semi-final game.

Next weekend is busy for us so we were hoping that after the Rock won today, that next weekends game would fall on a Friday or Monday

Turns out the we didn't have to worry about it.

9,066 fans were in attendance and the place was buzzing throughout the first quarter. We won the opening faceoff and scored the first goal of the game. At one point in the lead 3-2. 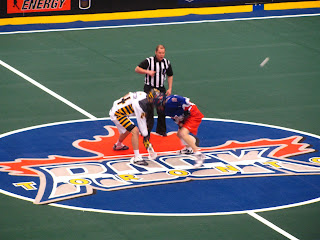 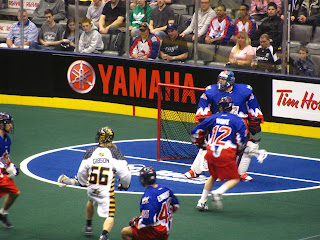 Down 5-3 and nearing the end of the first quarter, Kasey Beirnes scored this goal putting the Rock behind by just one goal at the end of the quarter 5-4. That was about how close the Rock ever got in the game. 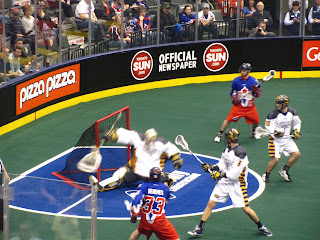 In the second quarter the Swarm stunned the Rock and their fans by scoring 4 in a row before the Rock managed a goal. At half time the Rock were stunned and losing 10-5.

Many of the fans were losing hope but the Rock Cheerleaders tried to keep up the fans spirits. 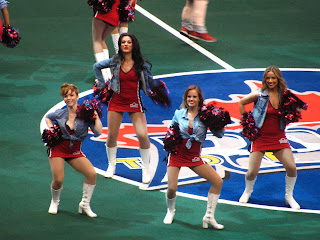 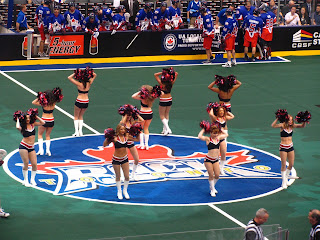 My face once again graced the scoreboard. 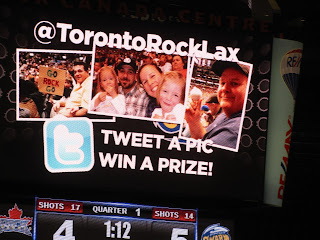 The game got worse from there. By the end of the third quarter the Rock only had managed to double their goals from the end of the first quarter and were down  14-8. During the final frame everyone knew the end was near. Iggy Rock wandered through the stands saying goodbye to the fans. of all the mascots in sports, he is my favorite! 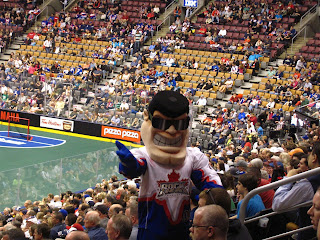 In the final quarter and a half, tempers got to the Rock, and they started a few fights, and found themselves with two minute penalties for being the aggressor plus the five minute fighting penalties. The Rock spent most of the last quarter down a man on the floor. 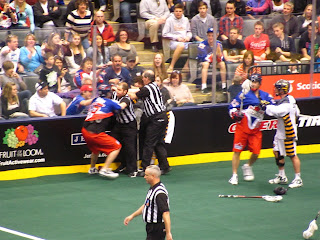 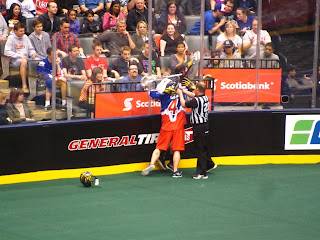 In the end the Rock, and I have been trying to avoid using this obvious description, were Swarmed by Minnesota 20-11, and really it was worse than that. At least we scored the last goal in the building for the year.

The Minnesota fans that were in attendance love d it. Teena was talking to a few of them after the game and it turns out that most of them are from Oakville and have family playing for the Swarm. 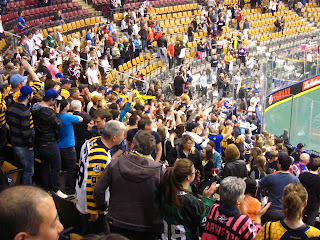 Despite the hostilities on the court the two teams shook hands and the Rock made one final lap of the arena to thank the fans. It was sad to see them go. 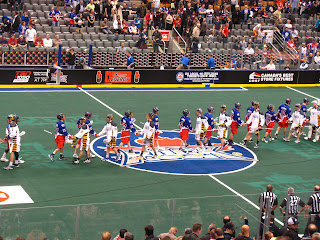 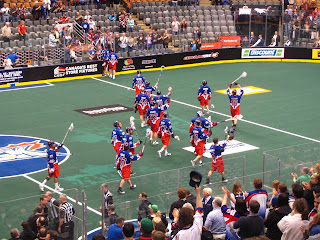 Hey! We were supposed to have won this! I was so pumped to see the Rock in the Championship game. Unfortunately it was not to be so. Instead the seats wait till next season and the return of the Rock and their devoted fans. 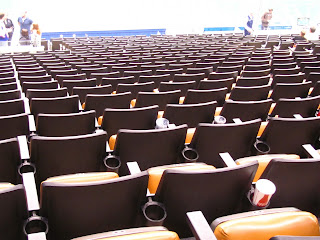