Toronto Rock vs Calgary - The Battle of the Best! 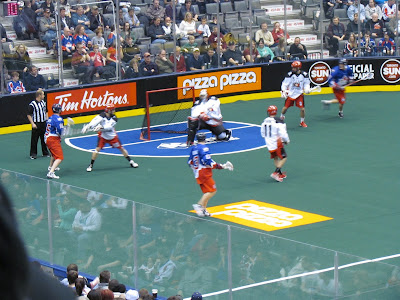 Tonight was a huge game for the Toronto Rock.

The Rock came into the game first place in their division with a 5-2 record. The Calgary Roughnecks, great name, came in a top the Western Division with a 4-2 record. Tonight would be the battle of the best in the NLL.

The night started off on a bit of a bad note as they would not let Teena into the stadium with her new camera. The mm (still don't understand that) was too high on her camera. Interesting as her camera is just a little better than mine but mine does not show the mm anywhere. It is a stadium policy, not the teams, and they  checked in Teena's camera to a safe place.


The national anthem was sung and at the same time tonight it was also signed for the deaf. It was very cool! 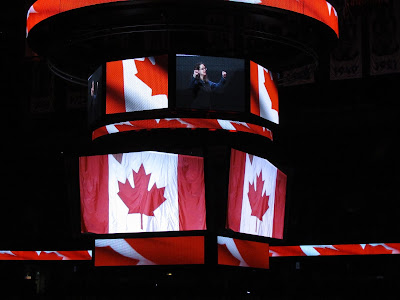 The opening face off. 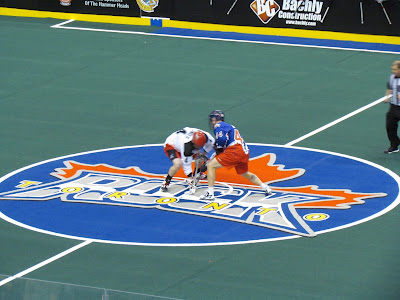 The Roughnecks scored first and dominated the Rock in the first quarter, outshooting them 17 to 8 and at one time had a three goal lead. The Rock were behind 5-3 at the end of the quarter, which could have been so much worse if it wasn't for the great play of goalie Nick Rose. 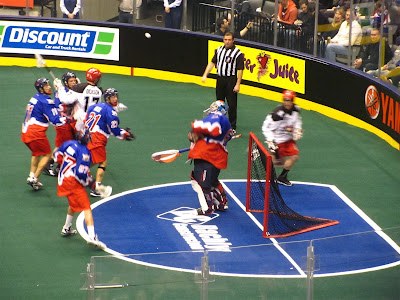 The Rock have great fans that are right into the game, cheering every save and high fiveing on every goal. 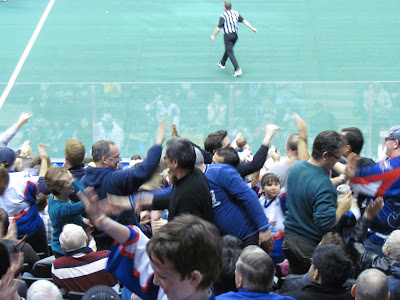 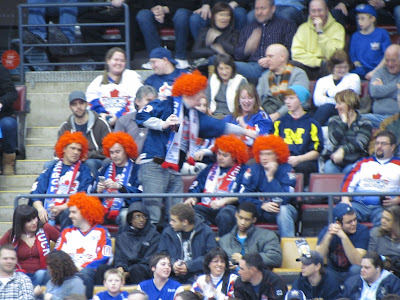 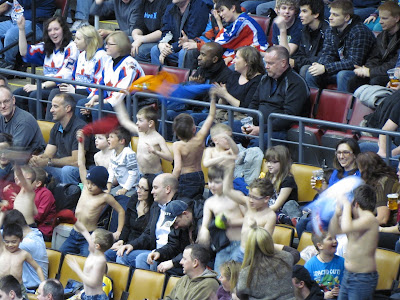 The Rock came back though and by the end of the half had an 8-6 lead. The game was a scrappy one and there always seemed to be a fight ready to break out. 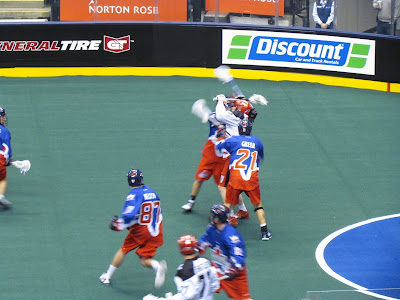 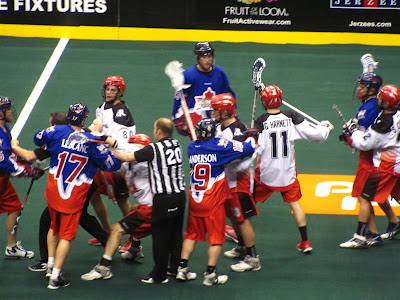 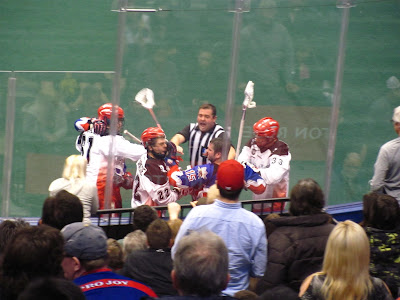 And then it did kind of erupt when Geoff Snider decided to take on a Rock player who wisely chose not to fight. The result was a five minute power play for the Rock and Snider getting a game misconduct. 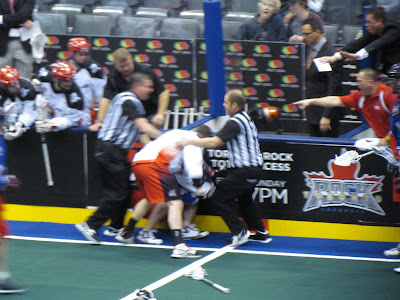 As usual, the Rock Cheerleaders put on a great show at breaks in the action. 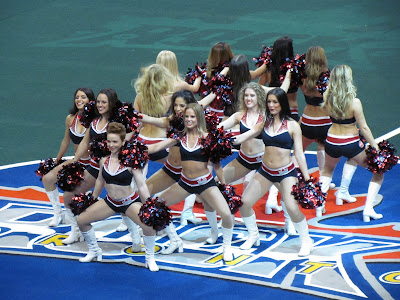 Here are a couple of action shots. It wasn't my best night with a camera. 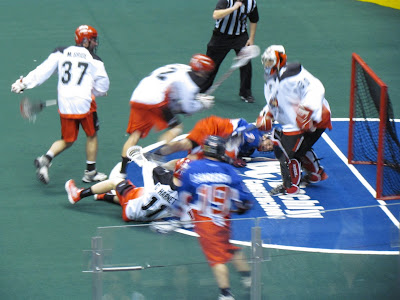 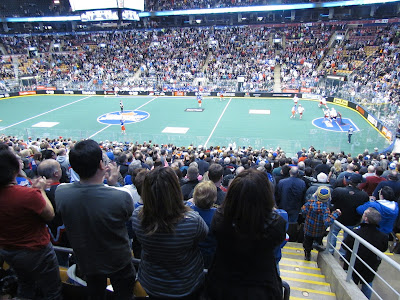 Sanderson scored the last goal of the game, sealing the Rocks win at 17-12. 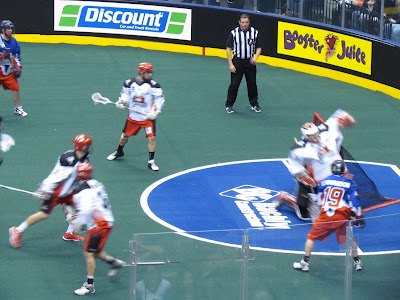 10,026 fans witnessed the win. It was the first game at home for the Rock that wasn't decided by just one goal. I love the way that after each game the Rock acknowledges the fans. 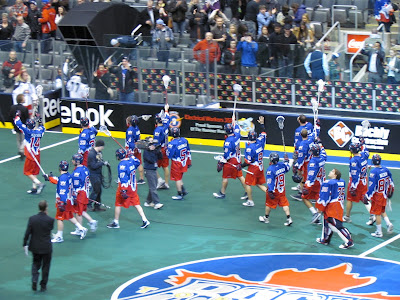 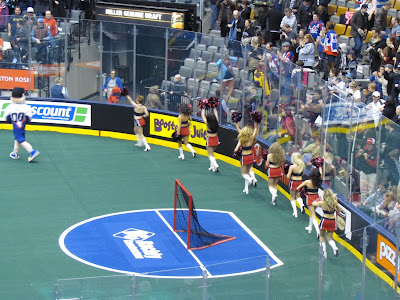 Oh and one final fun thing happened tonight. They put up some pictures on the scoreboard encouraging fans to send in game shots from their phones. One of the pictures shown was me!

Teena took it last year at our first game when I caught a ball. They must have taken it off her blog, which is OK by me. It was so much fun to see! 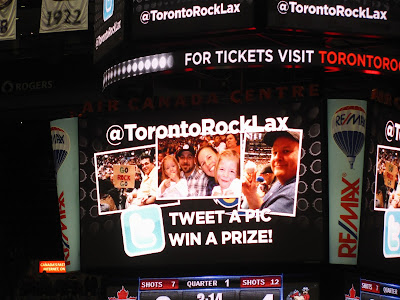 Another fun thing happened tonight. It was Colin Doyle Bobblehead night. The first 5,000 fans received a bobblehead of the Rock's captain. We arrived at the game at 7:15 and they had all been given out. Teena was talking to a woman who had a bobblehead who told her she was there at 7:00 to get hers and there were only about 20 left.

I was to go home bobbleheadless...or was I?

On the way out, just a couple of rows below me, someone had left theirs behind. The whole row had been empty for awhile so I picked it up. I was coming home with an official Colin Doyle Bobblehead after all! 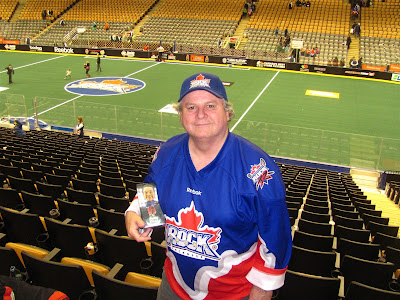 Teena and I both love going to Rock games. Teena bought her own Rock shirt tonight and we're going all in for season tickets for the rest of the year.

It's a fun, fast rough sport and I fast became a huge fan!
Posted by Swordsman at 23:13