Beer of the Week - Boreale IPA 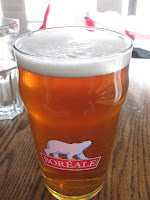 On our last day at Mont Tremblant, Teena and I went to Pizzateria for lunch. Her review of the lunch is here.

Up to that point I had been very disappointed with the beer selection in the village. Except for Microbrasserie La Diable, there was no craft beer, just the everyday big beer company beers.

Quebec is a haven for craft beer and I went to Mont Tremblant hoping to taste some great beer and haul some more home. The restaurants had all served the regular plain beer and at the SAQ and the grocery store, there were some import beers available but again no Quebec craft beer.

When I opened up the menu at Pizzateria, I was pleasantly surprised. There it was, Quebec brewery beers from Boreale Brewery. They carried five of their beers and one non-alcoholic beer on tap and one of them was an IPA!

Teena told me she has had the Blonde before and had enjoyed it. That was what she ordered. Of course, I went for the IPA. 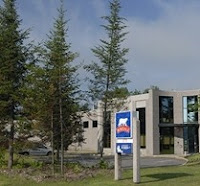 When I arrived home, I researched the brewery, one I had not heard about before, and was surprised that it has been around since 1988, opened by Laura Urtnowski, Bernard Morin and Jean Morin. Not only that but they still own and run the brewery which is the last large microbrewery still run by its founder-owners.

Teena took a sip of the Blonde and said she still likes it, so I gave it a try. I could tell it was a well done beer but just too sweet for my taste in beer. So it was on to my IPA.

Although the brewery has been around for 24 years, they did not put out an IPA till this spring and then only on draught. In September, they started bottling and selling it in six-packs in Quebec. 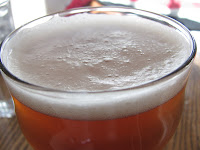 The beer was golden in colour but with an orangy hue. It was much more clearer than I had expected which created problems when trying to take a picture as the background would come through throwing off the beer's colour. The head was white and foamy. The beer must have been dry hopped as it had all those wonderful floral, citrusy hop aromas that I always crave.

This is one well-made IPA! There is a nice balance between the malt and hops but the hops surely win. It starts a little bitter and has much more bitterness in the long finish. I could only smile and order another.

I'm glad that Pizzateria has the good taste to have not only craft beer on tap, but a great one and can only hope that the next time Teena is in Montreal, that she manages to bring some of the Boreale IPA home with her.

We are staying in Tremblant and I had the exact same reaction as you upon arriving. I've had many Quebec craft beers and couldn't believe that the most common beers was Bud and Sapporo and no craft brew. So much so that I did a google search on my phone and stumbled on your blog.

Thanks ! My wife and I had a great dinner at Pizzateria and I could enjoy some Boreale (a past favourite of mine).