The Pirates of Penzance at Stratford 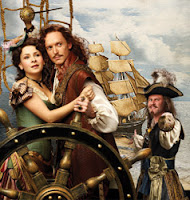 Twice a year, Teena and I take the train to Stratford to see a play. Today we saw The Pirates of Penzance along with Teena's sister, Sarah.

I have never seen a Gilbert and Sullivan play before and was looking forward to this.

Frederic, apprenticed as an infant to a crew of notoriously soft-hearted pirates, falls in love with Mabel, one of the many wards of Major-General Stanley. But the terms of Frederic’s indenture, along with his own keen sense of duty, keep the lovers apart. How can this sorry state of affairs be resolved?

It is presented as a play being put on by a late 1800s theater company. The stage hands and prop people were all in period dress. This allowed the play to be put on the way audiences would have seen in during that period of time when it was written. 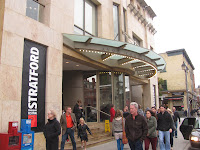 I found the story to be a little weak and perhaps it was due to the fact that we had seats off to the side, I found it hard to clearly hear the lyrics that were being sung. The show tunes seemed to be much too long. I found myself enjoying a tune but halfway through wishing it was done.

Sean Arbuckle made a great Pirate King and I also enjoyed C. David Johnson as Major General Stanley. Kudos also go to Steve Ross as the Sergeant of Police.

I am glad that I have finally got around to seeing a Gilbert and Sullivan play but would not go to see another. You can read Teena's review here.
Posted by Swordsman at 23:55