1812 Fort York Lecture: The Saviour of all the Canadas: The Leadership of Lieutenant-General Sir George Prevost 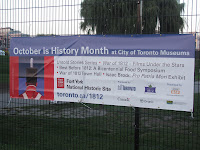 Tonight I had a decision to make.

I am healthy and back into fencing and practice is tonight.

Also on tonight was the first of four lectures at Fort York called the Untold Stories of the War of 1812.

Join us at Fort York over four weeks for this exciting series featuring renowned experts on subjects ranging from treason and treachery to the outcome of First Nations after the War of 1812.

OCTOBER 4 The Saviour of all the Canadas: The Leadership of Lieutenant-General Sir George Prevost during the War of 1812. In conversation: Major John Grodinski of Royal Military College with Anthony Wilson-Smith, President of the Historica Dominion Institute.

As you can guess, I went to the lecture and am very glad that I did. 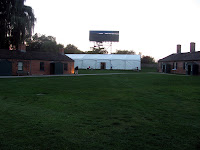 Historians have a very dim view of Prevost in his leadership of the war and during the two battles which he led. With all the reading I have done, I admit, that I did too. Going into the lecture, I felt he was an unconfident, nervous, wimpy commander, unwilling to take the offensive when he should, and when he did, was too quick to pull out of the action.

Major John Grodonski (to the left in the photo) gave an excellent talk on Prevost's role in the war. Prevost was constantly telling his generals not to take offensive action and take part in defensive actions only. Many commanders, especially Issac Brock, did not like this posture. They were chomping at the bit to take the war to the Americans. Little did any of them know that these orders actually came from the high command in Britain.

To quote Anthony Wilson Smith, who moderated the conversation, "So really he was told by London, don't attack anybody and don't tell anybody we told you!"

A good way to handcuff the man in charge of all forces in British North America! 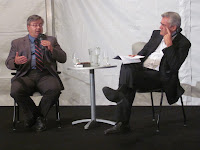 Grodonski, who with a good sense of humour, explained how historians look at single engagements where a man like Prevost always had to look at the big picture of the entire war, even in a single battle. He also laid a great case that the two battles where Prevost led the offensive, then pulled back his forces on the brink, of what many historians think a victory was, in fact, a tactical victory, even though the action is viewed as a defeat.

I look at both battles very differently now. In fact, I have a great appreciation for Proctor now and feel history should view him as a hero. Certainly I will read accounts of the campaigns of the war with a different attitude.

Major Grodonski has an article titled "Sir George Prevost, Defender of Canada in the War of 1812" in the most recent on-line issue of War of 1812 Magazine (online)

Tonight's event was filmed, hopefully to be aired on TV sometime in the future. I will certainly watch it should it come on! I also plan to go to others in the series.
Posted by Swordsman at 20:32