Beer of the Week - New Morning 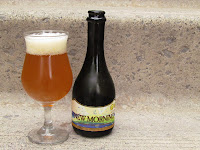 For a couple of weeks, I have been going into my local LCBO and eyeing up this unique looking bottle of beer, New Morning from Birrificio de Ducato in Northern Italy.

This week I decided it was time to pick one up and give it a try.

It was after buying it, bringing it home and doing some research on it that I found it that this is a Saison. If I had known that, it would have come home sooner! Saison is an old style of Belgium beer that farmers used to brew for their harvest workers, throwing in local ingredients and spices to give it taste. It's a style of beer that I really enjoy.

Birrificio de Ducato, or Ducato Brewery, was opened in 2007 by Giovanni Campari, who before that was a a home brewer with a BA in Food Science and Technology. In the five years since, the brewery is the most awarded micro brewery in Italy.  In 2008, it became the first brewer to compete in the World Beer Cup. In 2011, the brewery won seven medals at the European Beer Star Awards and was named brewery of the year!

New Morning is a Saison made with barley malt, wheat malt, rye malt, hops, wild flowers, chamomile, coriander, green peppercorn and ginger. Chamomile ... I should be very relaxed after this.

The beer was not named for a beer that was meant to be drank in the morning but for Bob Dylan's song, New Morning,  which was on Dylan's 11th studio album by the same name.


"This beer is particularly dear to me. I envisioned it while I was training at Birrificio Italiano (an Italian brewpub) during the spring of 2006. I was extremely excited, I could feel the dream that I had long held in my heart about to come true. Every morning I used to say “This is a new day” and since the first blossoms on the trees were enunciating the coming of spring, I decided to brew a beer to honor the season, rebirth and new beginnings. To express my vision I decided on a Saison because it is a beer strongly connected to the land."

It pours a cloudy orangy colour, obviously unfiltered. It's topped with a white head with an orange tinge. There is quite a bouquet of spice and perhaps flowers.

On first sip, there is flavor right away. A little peppery, a little spicy, a little bitter, all this littleness leads to a wonderful full flavour. This Saison could stand up to any other one out there.

I enjoy Saisons and definitely enjoyed this one. Problem is that at $4.15 CAD for a 330 ml bottle (11.15 oz), it is quite expensive. It is only for this reason that I would not run out and buy more!

Labels: Beer of the week, Italy