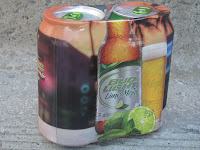 On the way home from work on Thursday night I came across a booth that was giving away free beer. This happened a few times last year so I crossed the road and lined up. It was a short line with maybe three people in front of me. Then I looked up and saw the sign, "Bud Light Lime Mojito". I almost got out of line and continued my walk home but I have told myself in the past that when it comes to beer I should be brave.

When I got home, I posted that I got two free cans of Bud Light Lime Mojito as my status on Facebook. Immediately my friend and beer sister, Darlene, came up with the comment "Ewwwwww!" I said, "You know I will be blogging about it" and she said "Be sure to quote me: Ewwwwwwwww!" 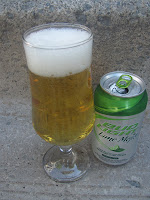 Darlene, you have been quoted and it expressed my thoughts as I was handed my beer. The guy behind the booth seemed very excited as he described the beer. I told him, "Hey I love beer! I love Mojitos! This should be great!"

OK, I lied but hey, he was giving me something for free.

I made sure it had a good chill like the fellow told me. Even waited 'til I drove to Hamilton and back and was thirsty. This beer was being given its best chance.

It pours a light golden colour with a white head, which dissipates quickly leaving behind no lacings on the glass. There is lots of lime in the aroma. 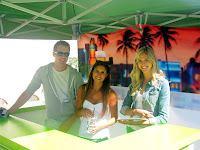 It says on the can "Premium light beer with a subtle twist of lime and mint". There is nothing subtle about the lime. All I could taste was the lime! I could not detect any mint either, one of the best parts of a mojito. No, just lime.

There was something weird in the aftertaste. Perhaps that was the mint?

If I was blindfolded and given this to taste, I would guess that this was a new ginger ale and lime pop. Even then, I might complain that this has too much lime in it and I'm a person who likes lime.

It is refreshing, I will give it that, but whatever it is, it surely is not beer!

Note: I walked by a stand giving these away again a couple of days later. I didn't stop, just kept walking!
Posted by Swordsman at 17:55

I AGREE, 100% with you! Swordsman
Also, to me this is the worst tasting so called beer i have ever tasted in my 50 years on this planet. Simly Deplorable! The after taste makes you want to go and brush your teeth immediately!

Whomever decided to brew this was certainly NOT a Brew Master! Im insulted that Labatts would even put it on the shelf, next to real beer. As far as worth a premium price. Well, Im LMFAO and feeling sick at the same time!

It's not Guinness, but it is refreshing. Lighten up. Those who like it, like it a lot. ;-)