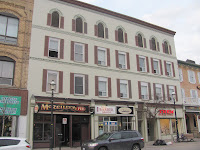 After Teena was done work, we went out for a little exploring. I don't have to work tomorrow but Teena does so it wasn't a late night. We were back in our room before 9pm!

Dunlop Street, which is the main street of Barrie, runs parallel to the shoreline of the lake. No surprise that there are many pubs, bars and restaurants along this strip. Teena said the place she ate at the night before, Donaleigh's, was not bad but had a poor beer selection. The poor beer selection was to be a ongoing theme. Teena also wanted to try something new so we went across the road to The British Arms.

From the outside and the decor inside, I had hopes for a decent beer selection. They had Harp on tap and just one craft beer, King's Vienna Lager from King City Brewery. Teena ordered a Keith's and was horrified to find out that they had run out!. She settled for a Stella. 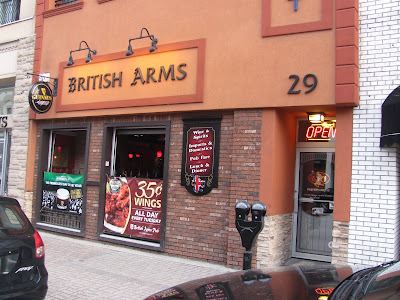 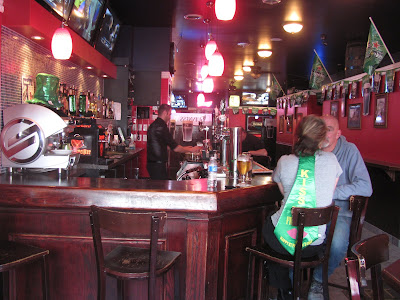 After finishing our beers, we moved on in search of food and decent beer which brought us to McReilly's Pub. The place was jammed, which always is a good sign, so we grabbed the last remaining table. Again the beer selection featured mostly big brewery beers, although keeping with the Irish pub theme they had Guinness, Harp and Kilkenny on tap.

I had a Harp and Fish and Chips. Teena had wings and a rum and diet coke. My fish and chips were excellent. The coleslaw was tasteless but the fish were two big portions perfectly done. Teena enjoyed her wings. The service, though, was bad. We both ordered a rum and diet coke after our meal and what did we get? Diet coke. Instead of fixing us a new one, the server instead brought us over a couple of shots.

When our meal was done, nobody came to clear of our table so we move to clean table which was vacated beside us.

I don't know if I'd go back. Teena's review is here.

I bet this street is rocking in the summer months. I am surprised though that a street which has Flying Monkeys Craft Brewery on it, does not serve any of their beer. What about supporting the home team!

Although an early night, it was a fun one. I'm looking forward to looking around town tomorrow and of course touring Flying Moneys Brewery. Should be a fun day. 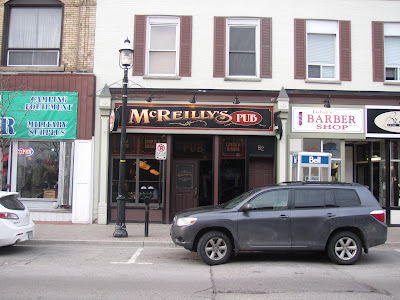 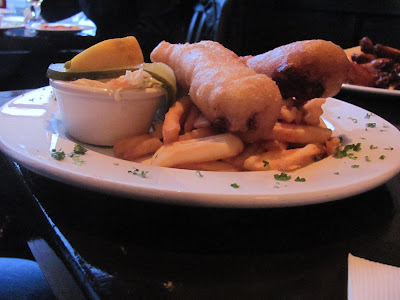 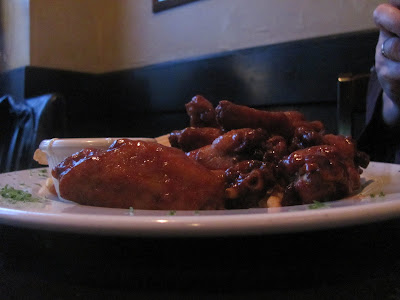 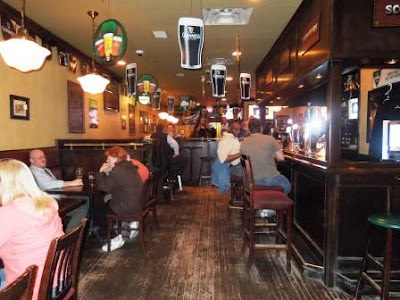