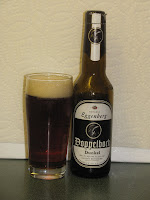 It wasn't until I brought home 2 bottles of Schloss Eggenberg Doppelbock that I realized that I had not yet done a beer from Austria.

This brewery was not built yesterday. They have been brewing beer in Eggenberg Castle in Vorchdorf, Austria, since around the 12th century. It was in 1681 that the property was purchased from the Monastery of Kremsmunster and the beer started to be produced to be sold commercially. As transportation was an issue in those days, the beer sold was to the local pubs, taverns and inns of the area.

In 1803, the brewery was bought out by the Stohr family, who has owned it ever since. Where most breweries have sold out to international producers, this one has been keeping it in the family for 209 years.

So what is a Dopplebock? According to the German Beer Institute ... "Doppelbock is a stronger and usually darker version of the Bavarian Bockbier. It is exceptionally malty, with very little bitterness. Standard Doppelbocks may have as much as 7% alcohol by volume.

Doppelbock emerged in the late eighteenth century as a powerful lager variant of the old monastic strong beer, the monks' "liquid bread," which they traditionally brewed for Lent , the 46 days between Ash Wednesday and Easter Sunday.

Because the monks believed that liquids not only cleansed the body but also the soul, they would make plenty of liquid instead of solid bread from their grain, and then drink it in copious quantities...the more, the holier."

Time to give this a try!

The beer pours brown with an off-white head. There is a slight malt flavour to this. The beer has a bit of a creamy mouth feel like you would with a stout. At 8.5% APV, I had expected a little bit of an alcohol burn in the taste but do not find it here. This is very malt forward but not sweet. It starts heavy with the malt taste, then surprisingly, the flavour falls away quickly in the finish.

On occasion, I enjoy a nice Dopplebock beer. Not too often, just once in awhile. Next time I'm in the mood, I would definitely have this one again.