Beer of the Week - Saison Dupont 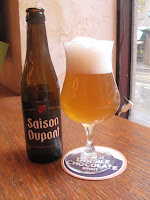 I was reading an article (which I have since lost) about the Beer Bistro. At the end of the article, it talked about food pairing and the name Saison Dupont came up. I am a huge fan of Black Oak Brewery's Summer Saison and have wanted to try other saison.

So, what is a saison?

The style originated in Wallonia, which is a French speaking area of Belgium close to the border of France. The region was all farmland and centuries ago, the farmhouses would brew beer in the winter for the workers, also known as "saisonniers" who tended their fields in the summer. Originally it was not a great quality beer and each farmhouse had their own ways of making it using barley, wheat, rye, spelt and spices.

Brasserie Dupont still brews saison from a classic farmhoouse brewery. Beers, especially the one I am trying today, have been brewed from this site since 1844. Alfred Dupont purchased the brewery in 1920 to help persuade his son, Louis, to stay home rather than moving over here to Canada to start his own farm. It was then purchased again in 1950 by the Rossier family who have run the br 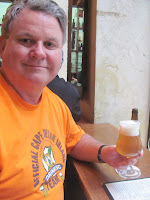 It is said that Saison Dupont, also known as Saison Vielle Provision, is the "quintessential version of the saison style" It has gained high praise from famous English beer writer Micheal Jackson (1942 – 2007) and other critics which help to raise it's fame across the world.

Wow! This should be good.

We arrived at the Beer Bistro and there was no need to look at the extensive beer menu, except to ensure that it was there. Greg, our server and really knows his beers well, is also a fan of this style and beer and this particular one.

The beer arrived and Greg poured it with a full fluffy white head. The beer is yellowish, maybe the colour of straw and cloudy due to extra yeast being added during the bottling process for allow the beer to further condition in the bottle. Spice, and I cannot name which one or ones, come through in the aroma.

The beer starts surprisingly a little sweet. I notice on the bottle that there is sugar along with malt in this but that sweetness quickly evolves in a slightly spiced taste with citrus notes. The saison finishes with a long slight sourness. Despite the spice notes, the beer is light, fresh tasting and very refreshing.

Having this confirms my love for the saison style of beer. My disappointment is that this is not available at Ontario liquor or beer stores. I know where I can get it though. Hot Friday nights may find me on the Beer Bistro patio reading and having a Saison Dupont.