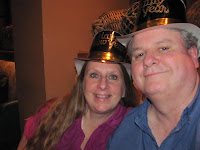 Teena and I came to Bermuda to celebrate the last of 2011 and the welcoming of 2012.

We heard there was a big party in St George’s with fireworks and laser lights but as we just had arrived at the islands decided to join in with the celebration the resort had planned.

It started at 9 with a 4 course fancy sit down meal. Appetizers, soup, main course and dessert. It was $75 US for those that were not going all-inclusive. We were.

The problem was the front of house staff were very disorganized. Our table seemed to be in the Twilight Zone where it could not be seen by staff. After 10 minutes, Teena went over to Victor, who manned the entrance and seemed to be the Captain of the room (that’s what I heard him referred to during the evening), who brought us over some wine. Then it was about another 10 minutes before we were asked what we would like for appetizers. 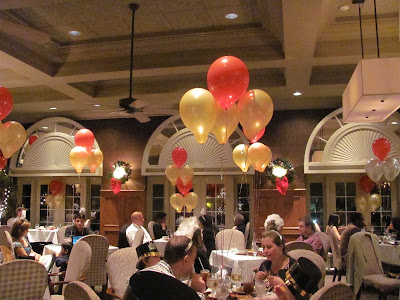 The whole meal went like that. It took over 2 hours to get the 4 courses. The food was excellent and one server, Livui, was great with the wine. He gave not a 6 oz pour, not a 9 oz pour, but the glass was filled right to the brim!

Teena didn’t like the apps nor the soup so would order my second choice. For appetizers, I had the Olive oil Poached Maine Lobster, Martini Style and Teena ordered (for me) the Trio of Hudson Foie Gras. I had never had Foie Gras before and enjoyed it. The lobster was excellent and refreshing. 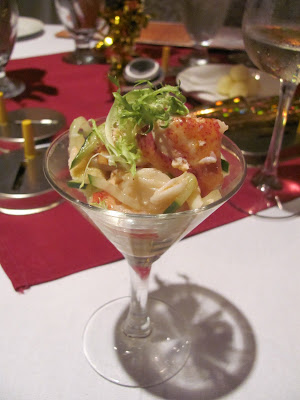 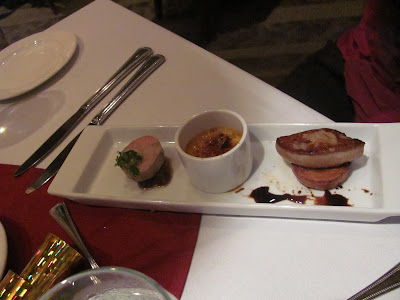 Second was Main Lobster Bisque and Teena had the Baby Corn Soup with Duck Confit. I liked the lobster bisque but it is something I could not have too much of but found the corn soup delicious, light and refreshing.

Teena and I both had Beef Wellington for the main. 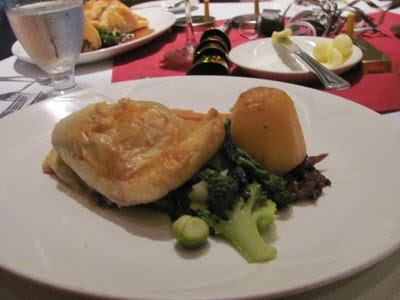 For dessert, Teena had the Apple Crumble Crostate (with cinnamon gelato) and I went for the Elixir Seasonal Fruit Salad. Teena really enjoyed hers and mine was a light, nice finish to the meal.

Afterwards we moved into the lounge for dancing and the New Years celebrations. There were not very many people there until about 15 minutes before midnight when the place became crowded. Bubbly flowed at midnight and it was a great time. About 15 minutes later, the crowd was gone.

The band was quite good and deserved a better crowd to play for a full night. They were a kind of jazz/Motown mix which we enjoyed. 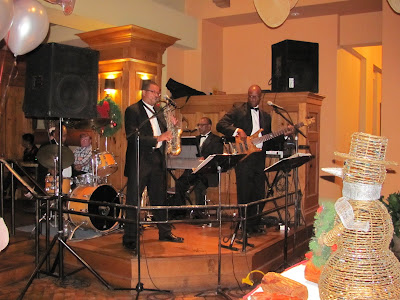 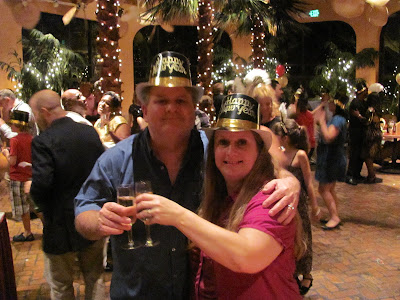 About 12:30, we went outside and found a clear sky. I pointed out the very, very few constellations I know. There was a warm breeze coming in off the ocean and it so nice being out there alone away from all the rest of the world. 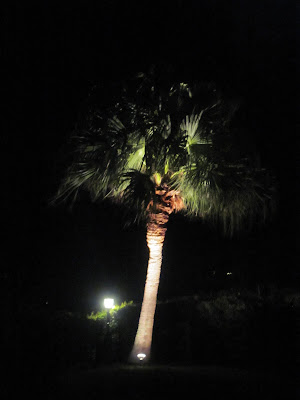 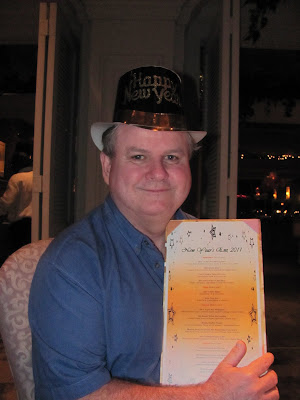