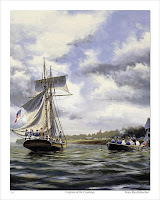 When Teena first gave me my Kobo Vox, I decided to do a search for free books and documents on the War of 1812.

Project Guttenberg has quite a few, although many do not transfer well to the ebook format. One that did come out well was An American Prisoner at Fort Malden and Quebec in the War of 1812.

The diary opens on the first day of the author's capture aboard the Cuyahoga Packet (pictured) in the early months of the war and ends quite abruptly when he receives orders to make ready what would be needed for him and the sick to return to Boston.

The diary's author's name was never recorded on the diary but experts believe with certainty that it was written by surgeon's mate James Reynolds of the Cuyahoga when it was captured on July 2, 1812. The forward, written when the account first was published in Quebec in 1909, gives an excellent argument to support this.

The forward also says that ""A very human document, and not without historical value". I found this to be very true.

It is a very short book but quite enlightening one of being a prisoner of the British in Upper Canada during the War of 1812. I admit that I was a total geek with this book referencing back to the dates in the diary when Reynolds wrote of the goings on outside the ship he was being held prisoner in, but not being able to determine the reasons why. He could only guess whether cannon and musket fire was an American success or not by judging the reaction of the forces and native peoples when they returned to the town where the prisoner boat was docked.

There is also a very good reference at the end of the book explaining what was taking place on the dates in question.

He was especially rattled by all the native peoples being drawn to Fort Malden, their comings and goings and especially when they celebrated long into the night after the British captured Fort Michilimackinac, on an island guarding the straits for the fur trade between Lake Huron, Michigan and Superior. He had quite a rant about that but never knew the reason why or even that they were celebrating and getting ready for next battle. The siege of Detroit.

His rants were great!

After he found out that Hull had surrendered Fort Detroit to an inferior British force (under the command of the Great Issac Brock), "Shame to him, shame to his country, shame to the world!"

Or on July 7th when he heard that "two hundred militia ran from 40 Indians and several of our men was taken. God save the ignorant for they cannot take care of themselves."

A must read, easily obtained from Guttenberg for anyone with an interest in the war of 1812.
Posted by Swordsman at 20:38