Beer of the Week - Tusker Lager 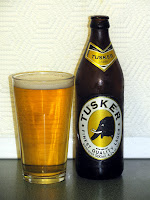 In all my 57+ years, I have never had an African beer. Today that changes as I found a beer from Kenya ... Tusker Lager.

Tusker was started in 1922 by George and Charles Hurst who were two white settlers to the country (original brewery pictured right). When they delivered their first batch of beer to the Stanley Hotel, there was a mixed reaction to exactly how good it was or wasn't.

They must have improved their beer as they are still around.

A year later in 1923, co-founder George Hurst was killed in a hunting accident by an elephant.

I found it interesting that in 1929 they first used malted barley in their brewing process. I wonder what they used before. Maybe that is why they had mixed reaction when the beer was first served at the Stanley Hotel.

The 1930s were a busy time for Kenya breweries. In 1930, they launched their first lager. In 1935, they bought out Tanganyika Breweries and the following year changed their name to East African Breweries Limited. In 1938, the brewery won its first brewing prize won in international competition.

In 1988, the company changed its name back to Kenya Breweries but through corporate restructuring (which I admit that I don't understand), Tusker Breweries today is 80% owned by East African Breweries Limited (EABL). SAB Miller owns the other 20%.

The brewery is very proud that Tusker is brewed from 100% Kenyan ingredients that are all locally sourced. They have their own malting plant which opened in 1942 and all the yeast is developed locally. The cornstarch comes from a local Kenyan company. All the sugar comes from West Kenya.

I love that the comp

any uses all local products which can only help their economy but sugar? Cornstarch? Not too sure what to expect with this beer.

EABL is also an important industry in the country as it employs more than a 1000 people from East Africa and is East Africa's leading branded alcohol beverage business. Not only do they sell their own beer but are major exporters to east Africa for international brands of beers and spirits. EABL has won the awarded of the "Most Respected Company in East Africa" five years in a row (2000, 2001, 2002, 2003 and 2004) and was second in 2009.

The EABL Foundation was founded in 2005 which assists people in Kenya, Uganda and Tanzania with water supply, education and training, health, environment and special projects. I think it's excellent that this company is doing this.

Their brand positioning Sstatement for Tusker? "For consumers who are truly national

istic, brand TUSKER is the beer that provides an everlasting bond of deep, natural friendship with their countrymen because only TUSKER Lager uniquely represents a true and refreshing spirit of national heritage."

Tusker is another word for elephant and the beer is named in honour of co-founder George Hurst which features an elephant or Tusker on its label. It comes in at 4.2% APV.

The beer pours straw coloured with a short white head which disappears quickly. There are traces of lacings along the inside of the glass but not much. It does not give off much of an aroma.

It is a sweet tasting beer and really not too flavourful. I would put this in a league with North American big brewery beer.

I think it is very impressive what this company has done to build its brand and help its nation but am not really impressed by it's number one beer.

Labels: Beer of the week, Kenya