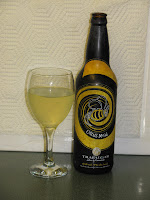 In Oakville there is a brewery which brews more than just beer. It also makes mead and are proud of it calling themselves Trafalgar Ales and Meads. We had a tour of the brewery back in April.

This week I was at the Beer Store on Dundas W and noticed they carried 4 different flavours of mead from Trafalgar so I picked up the Trafalgar Citrus Mead.

Mead has been around literally forever. It is mentioned in the Bible and evidence shows it has been drank by Vikings, Babylonians, Egyptian, Celtic, Indian, African and Scandinavians. In fact, mead is found on every continent except Antarctica.

So again, what is mead?

"In its most basic form, mead is simply fermented honey and water. The medieval method of making mead was to mix water and honey and allow airborne yeasts to convert the sugar into alcohol." 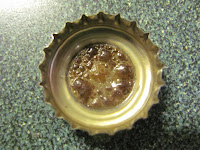 Mead is also known as "honey wine". It is thought that the term "honeymoon" came from a wedding custom concerning mead.

"As legend would have it, in ancient Babylon the father of the bride would provide the groom with all the mead he could drink during one lunar month. Thus was the origin of the term “honeymoon”

Hey, I never got a month's supply of mead when I got married!

So what is mead? It's not beer and really it' not wine. Mead is just that. It's mead!

I do like this warning I found about drinking mead from The Mead Maker's Page ...

"Anyone who has ever attended a Meading, a mead brewer's tasting party, knows how wicked a mead hangover can be. One friend reported a two-day hangover as a result of drinking a fair amount of the tasty liquid. There is some speculation that the natural preservative ingredients in honey may have something to do with this effect. The susceptibility to mead hangovers varies considerably from person to person. Consumption of water between glasses of mead is recommended."

I had no idea what to expect. Being made from honey, I really expected something sickly sweet, which is why I chose the citrus.

It looks like a cloudy white wine. The smell of alcohol is prominent in the aroma with a hint of citrus. No surprise really as this weighs in at 9% APV. Interesting is that the inside of the cap has bubbles, which I would take to be sugar bubbles, although I admit I could be way wrong.

The directions on the bottle says to serve cold over ice. I had a taste right away without ice and found the taste of alcohol overpowering the citrus. It also was very sweet. I wasn't too crazy about it.

So I poured it over ice like I should.

And that does make a huge difference. The ice takes away the alcohol smell and ta

ste and now I found myself having a nice refreshing drink. The ice and extra chill takes away the sweetness too. I now find this to be a very enjoyable indeed.

Enjoyable enough to have mead again? You bet!

Trafalgar have 3 other flavours and there are over 150 Meaderies in the US and Canada. I'm looking forward to learning about and trying more of this delicious historical beverage.
Posted by Swordsman at 18:26