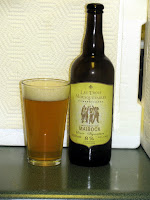 This week my Beer of the Week comes from Microbrasserie Les Trois Mousquetaires (The Three Musketeers Microbrewery) located in Brossard, Quebec.

One of Teena's co-workers in Montreal, Maryse, heard that I do a beer of the week and said she would bring me in a beer that I can't get in Ontario to try.

She bought the beer, put it in her fridge and when she went to get it to bring on a trip to Toronto found that her son had drank it. So out she went to grab another for me.

Thanks for taking the extra trouble to get this to me. I do appreciate it.

I had never heard of this brewery. Microbrasserie Les Trois Mousquetaires opened in June 2004 as the as the result of poor cigarette sales. Sylvain Plourde, Daniel Pion and a third person whose name I could not find worked for Imperial Tobacco in Montreal. The company closed the plant in June 2003 and all three found themselves out of work. About the same time they heard of a brewery for sale and jumped in. 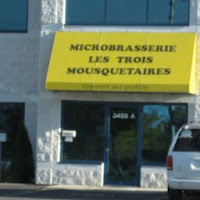 Months later Jonathan Lafortune was brought as brewer. John loved beer and decided to take up home brewing. He became part of the company when his friend, one of the "original" three musketeers who bought the brewery and the original brewer, asked him if he wanted to brew professionally. He jumped at the opportunity. In the coming months, he created over two dozen different recipes.

I found it surprising that Microbrasserie Les Trois Mousquetaires focuses on creating traditional German-style beers, which you don't hear much of in Quebec. The beer Maryse brought me is an 8% Maibock.

The bottle comes corked instead of capped in a 750ml bottle. On the back of the bottle it says, "This Maibock is a strong blond lager with an aroma of fresh cereals and herbal hops. Its flavour profile develops firm notes of alcohol, a touch of sweetness and a mildly bitter finish." 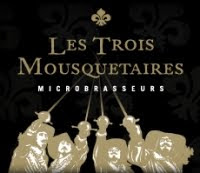 give it a pour.

The bottle is well-corked and it took a bit to wrestle the cork out. The beer pours cloudy so likely is unfiltered and perhaps bottle-conditioned. It is a straw-coloured beer with a nice white head.

The first thing I taste is the alcohol, then for a second a malty taste, followed in the end by a slight bitterness from the hops and once again the alcohol returns. I was not ready for the strong alcohol taste. I knew, was warned on the bottle, that there would be alcohol in the taste, but did not expect it to be as powerful as it is.

On subsequent sips, knowing what to expect, I found this a very enjoyable beer. With the strong flavours, 8% alcohol, and 750ml bottle, one is really all one would need.

This is a beer which I would have again and would love to try others from this brewery. I can see why Maryse's son would enjoy one himself.