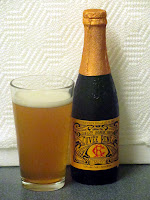 When I heard the LCBO had brought in Lindemans Cuvée René from Belgium, I was excited. I had only had it once at the Bier Markt when I spent an afternoon a year and a half ago sampling lambic beers.

It was not available in Ontario at the LCBO until recently and so I am very happy to be trying this today. I asked Teena to join me and to give me her impression.

Yeast was not discovered until sometime in the mid 1800s. Up until then nobody really knew what gave beer its alcoholic bump. Once discovered, brewers have been developing thousands of different strains of yeast to use in their brews.

Before the discovery, beermakers would leave there brew, or wort, uncovered, out in the open, not realizing that airborne yeasts were falling into their recipe, which reacted with the sugars already there and made their beer into beer.

There are now only 7 breweries in the world which make beer the old way. Six are in Belgium, including Lindemans. Today the wort is

left in open air vessels called cool ships to pick up the airborne yeasts. Lindemans' cool ship is pictured to the right.

Cuvée René is what is called Gueuze.

"The height of the blender's art is the production of gueuze, a blending of lambics from casks that are at least one and three years old. This blending creates an additional fermentation in the corked bottle, as the yeasts alive in the aged lambic eat the sugars present in the young lambic. The result is a slightly higher alcohol beer (an average of 6 % alcohol by volume versus 5 % for other lambics) and, most important, carbonation."

Time for us to give it a try.

The bottle is capped and when we both opened our bottles were surprised to find it was also corked. Not surprising as there is a fair bit of pressure in the bottle. The beer pours light amber in colour with lots of aroma and a very active head.

From here I wish to go to Teena's experience first.

She was quite surprised at how active the head was when she poured hers. She took the first sip as if it was a regular be

er. She found it a surprising strong sour taste. From there, she decided it was better to sip it as you would a wine. She found the Cuvée René had a different feel about it and enjoyed the bubbly champagne experience. When it came to the taste, it reminded her of a dill pickle, a briny kind of taste. Blindfolded she would not know what it was and would have guessed a wine product and definitely not a style of beer. Even though it is only rated at 5.5% APV, she could feel the alcohol content. Enjoyable to have one but would not want any more.

Like Teena, the sourness caught me by surprise and, yes, it is much better to sip like a wine. I found it quite refreshing, especially on a warm day like today. I could have a second but would want to switch away after. A big surprise was between sips was when I licked my lips, the sourness was there to experience once again. 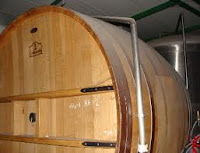 If I was given a blind taste test, I would guess a very dry champagne.

In describing the experience of having a lambic beer, the last word goes to the Beer Hunter Micheal Jackson ...

"The Lambic family are not everybody's glass of beer, but no one with a keen interest in alcoholic drink would find them anything less than fascinating. In their 'wildness' and unpredictability, these are exciting brews. At their best, they are the meeting point between beer and wine; at their worst, they offer a taste of history."

No better way of putting it!