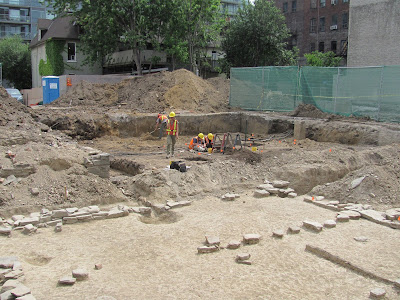 Early this week I was walking by the dig that is going on at King and Bathurst. I have written about this before. I was excited to find a crew actually doing their archaeological research on the site. So in I went and interrupted one of the workers who was quite happy to set down his shovel and talk to me. 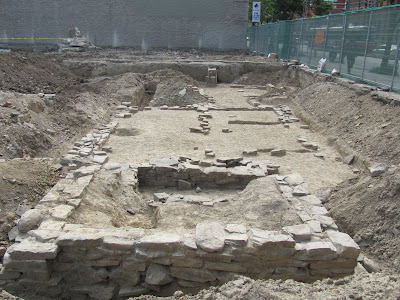 Freed Development, who is building a new condo on the site, knew there may be ruins beneath the old hotel and had set aside building time to allow Archaeological Services Inc. to go in and research the site.

According to a CBC news article, Ron Williamson from Archaeological Services helped craft the city's strategy to managing archaeological sites said "To be honest, mid- to late-19th century [archaeological] resources are found fairly frequently in the city as part of this process," Williamson said, adding the city has been "quite good" at recognizing the history of these structures." 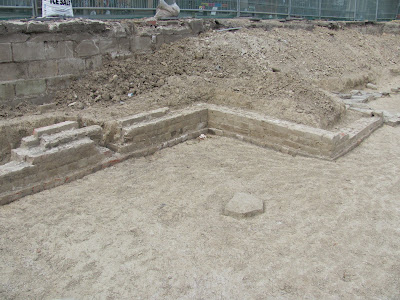 The building on the site is an estate from the 1840s. They have done as much research on the foundations that they could and the area where they are standing above was full of topsoil which they had dug out to look for artifacts.

We spoke about the well which I has fascinated me since the first time I saw it. They dug down about six feet, then pushed rods down to see how deep it might have been. Only a few feet down was pure sand so the well likely was not a deep one. Being close to the lake, it may not have needed to be deep to pick up ground water. I do like the way, though, that it appeared to be enclosed within a building. 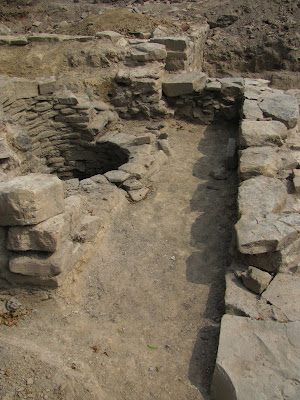 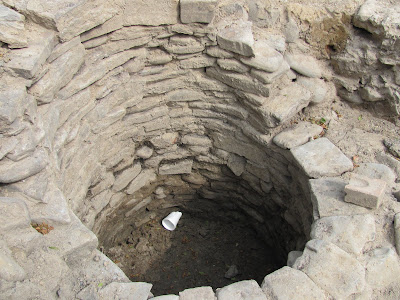 I wandered the site and took a few more shots. I believe the wall which the well is behind is an old fire place. The beauty of this if I am right is that the heat from the back wall may, and I mean may, have kept the well in the back room from freezing. Just my guess. The shape and construction suggest this to me. 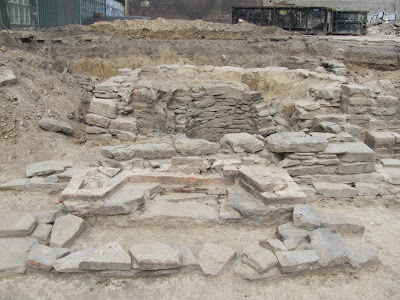 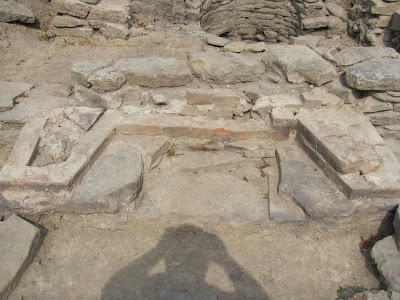 Digging through the topsoil for artifacts was the last step of the research process for Archaeological Services. Once done, the site will be buried.

Ron Williamson said it is unlikely that a find would stop construction of a project altogether.

"If we were to find a site that dated to 11,000 years ago by the very first occupants of the area, that would be a site that people would think very seriously about," he said.

You can't stop every project when you find material like this but we routinely uncover these, mitigate them, record their important features and then also participate in their interpretation and commemoration."

A map of areas of potential archaeological significance in Toronto is here.

A couple of days after, I noticed the red flags on the dig were gone. Then I saw that the topsoil had been had been replaced in the last past of the dig and a digger was parked by it. It would be nice if the builder could design a garden in front of the new building showing the foundations or even place a wishing well in front of the building above where the original once stood. Something to commemorate what was once there. I do doubt it, though.

Sadly tonight when I went by, the entire site was once again buried. It will be a less interesting trip to and from work for me from now on. 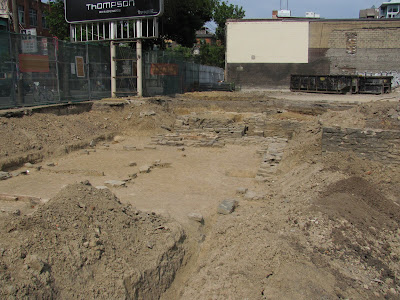 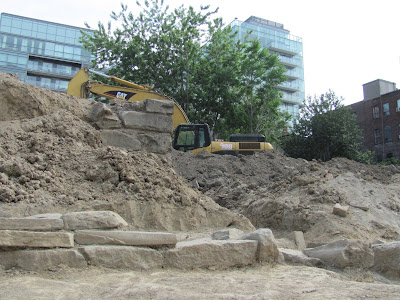