Beer of the Week - Stubblejumper Pilsener 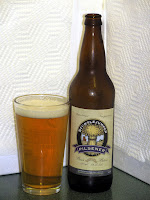 Teena's co-worker, Dorothy who lives in Vancouver, was heading to Saskatchewan on business recently. She had heard from Teena that I have yet to have tried a beer from that province and to my delight brought me back a couple from 2 different breweries.

The first one I tried was a Stubblejumper Pilsener from Bushwakker Brewpub. Yes, it is spelled correctly!

Bushwakker Brewpub opened in 1991 and the owner, Bev Robertson, was a pioneer in pushing the province since the mid 1980s to allow for brewpubs or "tied houses" to be opened in Saskatchewan. 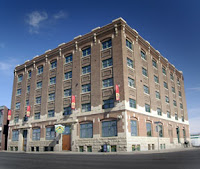 Originally a professor at the University of Regina, he was on sabbatical in Germany in 1977 and learned to love the beer there. When he returned to Canada, he could not believe the poor quality of the big brewery beer here. So he decided to learn to brew his own.

After successfully brewing small batches, he thought it would be a good idea to help to form a home brewing club to bring together other small home brewers. The group called themselves ALES (Ale and Lager Enthusiasts of Saskatchewan amateur brewing club). Bev had two friends join him for his Monday night brewing sessions. They brewed 15 different beers during the winter, all in 70 litre batches, and all on a Monday night from the Robertson kitchen. As they were also cross country

skiers, they called themselves Bushwacker Brewing. Bushwacker is a term for skiers who blaze their own trails.

In 1986, their Palliser Porter took Best in Show in Toronto at the Canadian Amateur Brewing Association (CABA) competition. The cup hangs proudly over the bar today and it is a regular on the taps.

In 1988 as chairman of the Saskatchewan Health Research Board, reporting directly to the Minister of Health, he made a suggestion to the government that Saskatchewan should not be the last province in the country to allow brewpubs. The government listened and legislation was passed in 1989.

Craft Brewers Association and sought advice from local business consultants. In 1991, he found the money to open his own brewpub called Bushwakkers. The name was spelled this way to avoid any trademark issues and it does stand out.

Being open for 20 years, needless to say, they have been successful. Bev`s son Scott was hired away from Bushwakkers by a Singapore group to set up breweries and train brewers for craft breweries in Japan. Not bad for a kid from a brewpub in the prairies!

The history on the website is more detailed about the fight to allow brewpubs to exist in Saskatchewan and is definitely worth the read.

Stubblejumper, which is slang for a prairie grain farmer, pours a very light golden colour with a nice white head. It takes a little while for the head to dissipate and leaves behind nice white lacings. The first taste is interesting. It starts with a slight bitter note, then comes a little sweetness for a moment before the hops take over and do their job with a long bitter finish. It is never an overpowering bitterness but one which is just right for a pilsner.

I love pilsners and this is a very excellent pilsner. I would never hesitate to have another of these again. If in Regina, I know the first place I would be hitting!

Thanks, Dorothy! Can't wait to try the next one!
Posted by Swordsman at 16:35