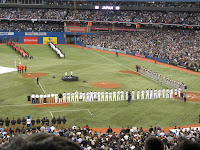 Tonight Teena and I were at the Jays' Opening Day.

Home openers are special. Opening day, the first game of the season is even more special. Where other sports play their exhibition games at home, baseball has theirs in Florida and Arizona. Opening day is when every team starts their seasons with hopes and dreams. Opening day is the first time fans get to see their teams. With a win on opening day, your team is tied for first.

Teena and I have been to every opening day but one since we met. In the past 5, we have seen 4 wins and an extra inning loss.

Our record was improved tonight as the Jays pounded the Minnesota Twins 13-3.

Fans were anxious to see Rajais Davis's speed. They did in the first inning as he beat out an infield single and foiled the Twins attempt to get him out in a run down.

They wanted to see Jose Bautista, the 54 Home Run man, the man who just received the Silver Slugger award put one over the fence. He did not disappoint. 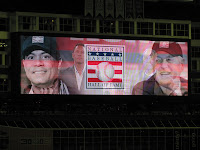 s. Well, he started the 2011 season one better by smacking 2 home runs and lining a triple and driving in 5 of the Jays runs.

Ricky Romero pitched a great game but I think the long periods of sitting on the bench took their toll on him. He did throw 6 1/3 innings, gave up 3 runs, but only one of them earned. Best of all, he recorded 7 strike-outs which fans love as everyone in the stadium gets a free slice of pizza from Pizza Pizza on Monday.

In the pre-game ceremony, Jose Bautista was presented with the 2010 Silver Slugger award and there was a presentation to Roberta Alomar and Pat Gillick for their induction into Cooperstown.

All in all a great night for Jays fans. The Blue Jays proved that 2011 will be a fun season. 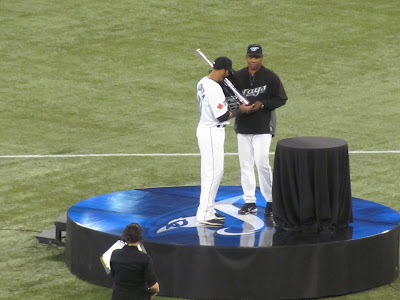 Pat Gillick, left and Roberto Alomar watch the unfurling of their banners above the stadium 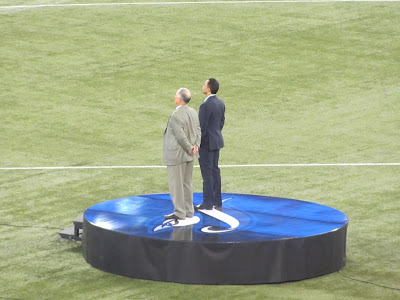 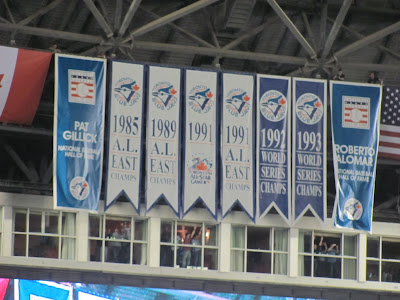 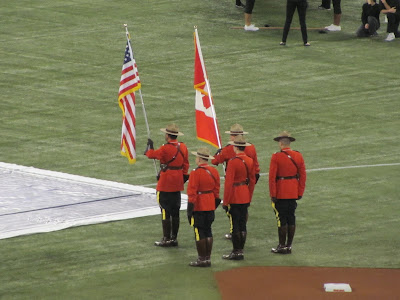 Ricky Romero in the wind up. 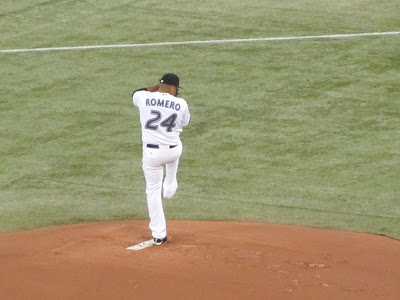 I got lucky with this shot. Bautista connects for his first home run of the season 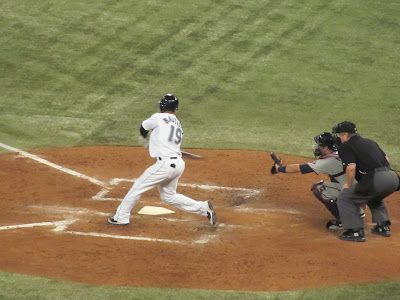 Hopefully we will see many more of this. 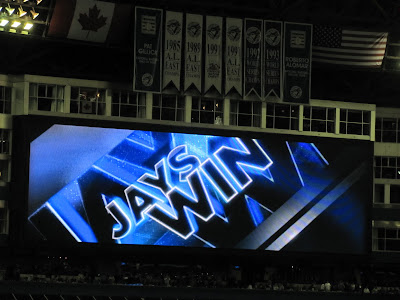