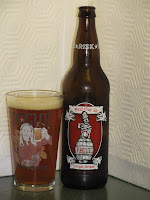 I have had Rogue beers before and have enjoyed them. In fact, Rogue Brutal Bitter was my Beer of the Week 2 years ago. Yes, I found it delicious.

Teena brought these back for me when she was in B.C. a couple of weeks ago.

Rogue has been brewing beer since 1988 and from their present location in Oregon since 1989.

In the early 1990s, they created Dead Guy Ale as a private label beer for a restaurant/bar chain called Casa U Betcha to celebrate the Mayan Day of the Dead (November 1st, All Souls Day). No wonder they named it Dead Guy Ale.

I do love the name. "The Dead Guy design proved so popular with consumers and especially Grateful Dead fans, that we made it the label for our Maiebock ale. Even though the association with the Grateful Dead band is pure coincidence, we have gratefully dedicated Dead Guy Ale to the Rogue in each of us."

So what is a Maiebock (pronunciation is "My Bock")?

According the the German Beer Institute: "Maibock (literally: May Bock) is the Bavarians' strong, golden lager favored during the brief transation between the severe winters along the northern edge of the Alps, when people hunker down indoors, and the hot summers, when people flock to the beer gardens. 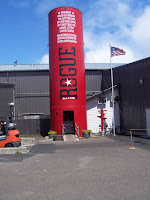 While most Bockbiers are dark-amber to hazelnut brown in color and exceedingly malt-accented, the Maibock is brewed entirely wih pale malts for a warm golden hue. It is also more agressively hopped than others bocks for a refreshing finish. Thus Maibock, like the lusty month of May, is a transitional a brew. It still has some 6 to 7% alcohol as do its wintry cousins, but its brightness and bitterness already foretell the perpetually blues skies of summer when the straw-blond Helles and the pale and spritzy Weissbier predominate."

Interesting is that the description describes a Maibock as a lager but Rogue only brews ales, and, of course, this is an ale. So I wonder if it is a true Maibock. It has won many awards, including Gold at the 2009 World Beer Championships.

You will notice I have a Rogue Glass. Jason, a great bartender at Taco Mac, gave it to me when I was on a fencing trip to Atlanta.

The beer pours a dark amber colour with a nice head. After the head dissipates, there are lots of lacings along the side of the glass. There is a nice hop note in the fragrance. The beer is cloudy. I am unsure as if it is because it is unfiltered or bottle conditioned.

This is a very nice tasting beer.

On the first sip, there is a nice bitter hop note that tails off but remains through the finish. There are 4 different malts used and I sense them in the middle of a sip. The hops come through again on the finish, but not as prominent as when the ale first touches your tongue. This is a very very nice beer.

Rogue has an excellent reputation among the beer geeks and for good reason. This is the third or fourth beer I have had from Rogue and everyone has been excellent.

Can't wait for my next Rogue offering!
Posted by Swordsman at 15:17