BOOK: Rum-Running: Stories of our Past 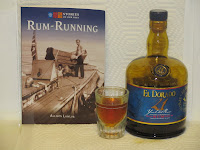 Teena's sister, Sarah, and her husband, Joey, gave me the book, Rum-Running: Stories of our Past for Christmas.

They know I enjoy rum and Canadian history and would enjoy this read.

Rum-Running is an intriguing look at one of the most fascinating aspects of Atlantic Canada''s past. Journalist and author Allison Lawlor chronicles the history of this furtive trade and recounts the exploits and escapades of the East Coast''s most infamous liquor smugglers. Complete with enthralling first-person accounts, fact-filled sidebars, and over 60 photos, and written in an easy-to-read, accessible style, Rum-Running is the rollicking story of one of the most captivating-and controversial-chapters of Canadian history

I read the book the week I was off during Christmas. However, sometimes my skills of procrastination come to the front and it took 'til now to write the review. Teena read it after I did and posted her review right away.

I really enjoyed this book. It was an excellent study of bootlegging in Maritime Canada during prohibition. There were some excellent tales told and I liked the fact that the book really never romanticised the period but told the stories for what they were.

They point out, using U.S. statistics, that the U.S. arrested 577,000 offenders from the early 20s to early 30s, seized more than a billion gallons of booze, 45,000 vehicles, and 1,300 boats. The human cost was greater with over 2,000 gangsters being killed along with 500 federal agents. Prohibition, instead of cleansing America and Canada, instead created the invention of organized crime which is still being dealt with to this day.

This book is an enjoyable read of part of Maritime Canada's history and I would highly recommend it.
Posted by Swordsman at 11:04

Now this sounds like a book both my husband and I would like and that doesn't happen very often! Will definitely look for this at the library, thanks!