Saturday in the Park - Kitchener Ribfest and Craft Beer Show 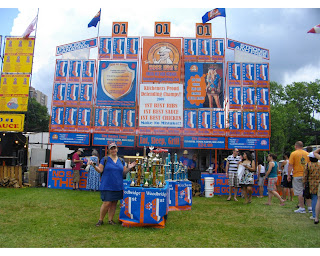 Teena and I enjoy ribs, craft beer, day trips and the train.

So when we saw that Kitchener put on a Ribfest and Craft beer show all rolled into one, we knew we had to catch a train and hit this event.

The beauty of the train is that we don't have to fight traffic and VIA is our designated driver.

We arrived in Kitchener around 1:00 and the train would pick us up again at 9:30. We both were worried that we would hit the Ribfest for a few hours and then be left with nothing to do. We needn't have worried. It was about a 15 minute walk to the park from the train station to Victoria Park where the festival was being held. We didn't leave until a little after 7.

We were both hungry when we arrived so decide to each get a 1/3 rack of ribs (4 bones) from different places to try. It is a little pricey at $9 but the ribs were great. Teena is pictured in front of Boss Hogg's BBQ from Kitchener and, as they were the home town favorite, there was a constant huge line so we tried a couple of different spots.

Teena bought from Camp 31. Hers were quite saucy and sweet. 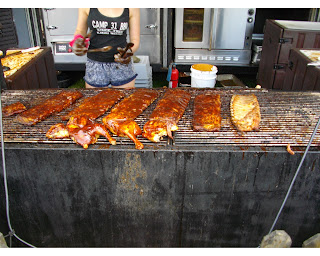 I bought the drier smokier ribs from Crabby's BBQ Shack. Teena liked hers the best, whereas Crabby's were my favorites. 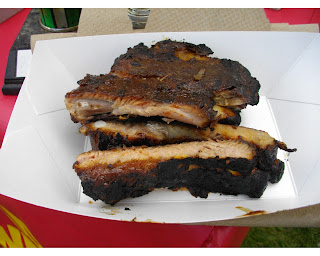 Then we were off sampling beers. It cost $6 to sample which gave you a 5 oz sampling glass. Tokens for each sample were $1 each, which makes it quite cheap to sample some great Ontario craft beers.

I enjoyed the Waterloo Dark. 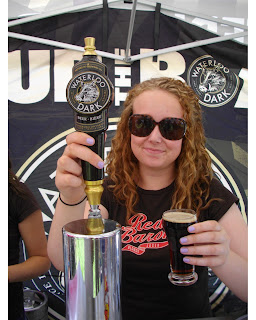 Teena, in her new hat, gets a sample from Flying Monkeys Brewery, my favorite booth of the day. She enjoyed the Anti-Gravity Light, whereas I am a big fan of their Hoptical Illusion. 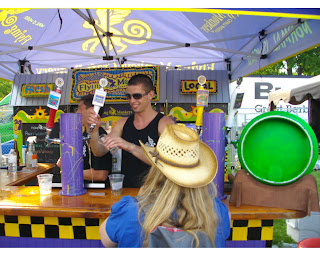 Best in show for me was Flying Monkey's Netherworld Porter. 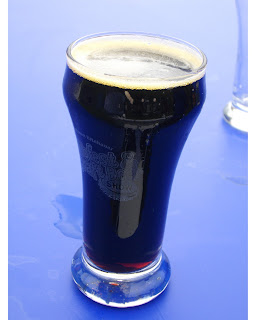 The park was packed with people. This picture is from when we first arrived at 1:00 and people kept flowing in. By the end of the day, the lineup to get the sample glass ran the length of the park and every beer booth had a line-up 10-15 deep. 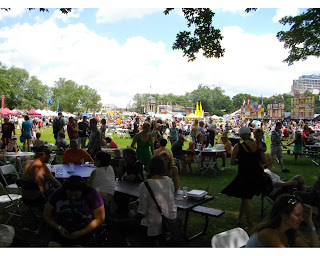 We got a kick out of seeing this couple in the foreground, who had 5 full rack dinners in front of them. Don't think many could keep up to them. 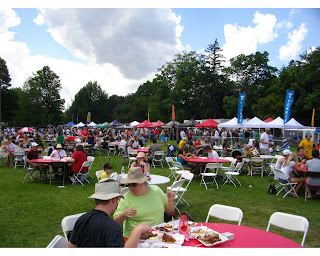 Sampling beers builds a hunger so this time we went for the better deal of the $7 pulled pork sandwiches, which again we bought from different places and shared. Teena chose Jack the Ribber, whose logo looks like poo with a hat on. Reminded me of Mr Hankey the Christmas poo, from South Park. Bad logo, good pork! 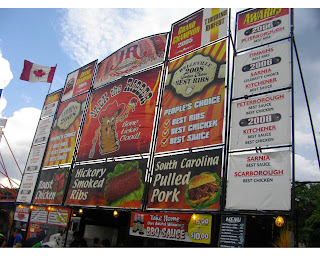 I went to Blazin' BBQ for their smokier pork offering, which was my favorite. Teena's were good and sweet, which she liked better, but I guess I am a fan of the smoke. Mine is the round sandwich. 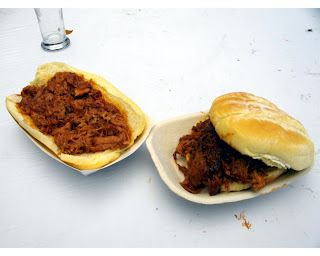 There was a hat booth there and after 8 years of coaxing, Teena finally bought a hat, which looks great on her. 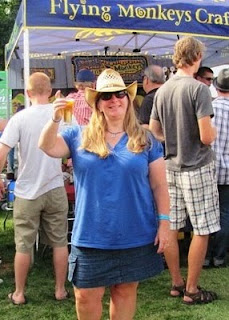 In fact, in typical Teena-fashion, she liked it so much she went back shopping for a second. She was successful and came home with 2 great looking hats for the summer. 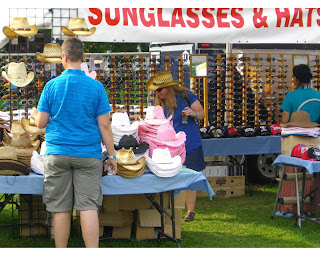 There was a great band there called Fiddlestix which played celtic, rock, and country all to their own style, plus a few of their own originals. They were awesome and I would love to see them again. Steve Bowen was so great on the electric fiddle and we had to laugh as their bass guitarist, Carley Hoffman, never once stopped smiling. I hope they are successful as they have a great sound and put on a great show. 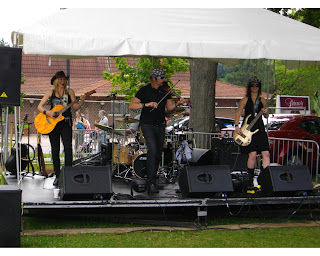 After 6 hours of sampling beer, eating, being in the sun and heat, we headed into town to Bobby O'Brien's. Although they have a great patio, we elected to stay inside. 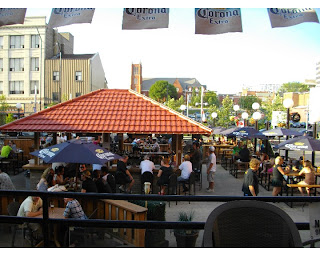 It was a fabulous day and is now on our list of annual events. For Teena's review of the Ribfest click here. For here review of Bobby O'Brien's, click here.
Posted by Swordsman at 23:54

What a fun day!