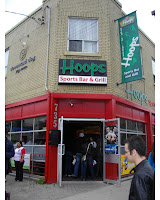 Today the FIFA (The Fédération Internationale de Football Association) went into day 2 of the World Cup tournament. Canada did not qualify, so instead I rooted for Mother England.

Today England opened with it's first game against the USA. Teena and I thought it would be fun to see the game at a pub/bar with a pile of soccer fans.

We tried to get into the Football Factory on Bathurst but the inside was full. We were told that we could sit on the patio and watch through the window. I don' think so.

Instead we walked along Queen and found Hoops, a new sports that has only been open for two weeks. We were lucky as not only did we get in, but also found a place at the bar. Ten minutes after we were there, the place was declared full and they weren't letting in any more.

The place was great with TVs everywhere, including a huge one over the bar. The crowd was right into the game and it was mostly a pro England crowd. We had some beers and ate 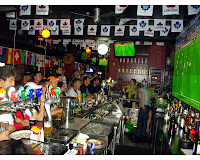 during the game. Teena had nachos which looked great and I had the always healthy fajita pizza, which was fabulous.

It was a good game but Green, England's goalie, let in a very soft goal and the game ended in a draw, one that England should have taken.

We had a great afternoon and, despite the huge crowd, were well looked after at the bar. The two girls did a great job serving all afternoon but sure looked ragged at the end. I would definitely go back again for a drink, to eat or watch the game. My feeling is that it's not the last World cup game we will be seeing there.

Oh, and after 6 games in my office pool, I only have one right.Damn!
Posted by Swordsman at 18:10