From Beer to There - Beer Tasting & Appreciation Course 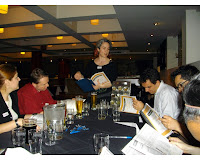 In January I found this beer course offered by Harbourfront on beer appreciation called "From Beer to There".

It was put on by Mirella Amato who teaches about beer full time. Nice job!.

You can find more about her and other beer courses and tastings she puts at Beerology.ca.

Each class takes place at a different pub or brewpub. Tonight's first class was held at Duggan's Brewery on Victoria just south of Queen. I was looking forward to this course for months and was not disappointed. Ten of us were in class, each anxious to learn about beer, some who knew little and some who knew a lot. There was much to learn and Mirella is an excellent teacher.

Tonight's first class was Beer Basics, what's in beer and how it is made. The first hour is class time where we went over exactly what beer is. On my own in the past few years, I have been learning quite a bit about beer and tonight continued to learn. Sampling came in the second hour but, as we were in a brewpub, could order a beer to quench our thirst through that first hour. I had the Duggan's Czech Pilsner. 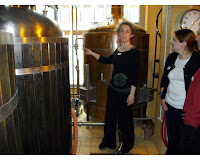 The session was excellent as we not only sat and listened but the class was totally interactive as we smelled hop pellets, felt hop flowers and tasted a variety of barley some plain, some roasted. Very informative.

Then came the second hour and the sampling. Mirella had supplied us all with booklets, which contained a helpful beer evaluation sheet, complete with a colour chart and different words to describe aroma, mouthfeel, finish and flavour. Over the hour, we had samples of 5 different beers. The first 2 were lagers, the next a Bock, which is a strong lager, then onto an ale and finished with a stout.

I didn't mind the Asian Lager we started with. A little different as it was made with rice and Japanese hops. The next was a German Pilsner, which was right up my ally as I enjoy a nice refreshing pilsne 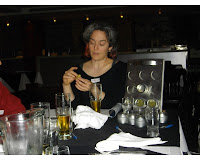 r and this one fit the bill. Then we had the bock, full of flavour, sweetness, and finished with a Carmel taste before disappearing quickly, a characteristic of a well-brew Bock.

The #9 IPA came up next, named as such as it uses 9 different malts along with a good dose of hops. This is a great complex ale, which I not only enjoyed but hauled a half dozen home afterward from Duggan's store.

We finished with the stout which I too enjoyed. Coffee was in the aroma and taste with a good bitterness which came not from hops but from the dark roasted malt.

Overall it was an extremely enjoyable evening. The discussion was good, everyone was eager to learn and the beer, well, was excellent. If interested, contact Harbourfront as I believe there may be room left for the remaining 5 classes.

I can hardly wait 'til Beer Styles next week. 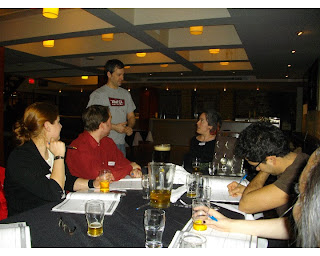 Owner/brewmaster, Michael Duggan, in the Millstreet teeshirt (he once was head brewer there)
Posted by Swordsman at 22:09