Fencing at the 2010 Provincial Championships 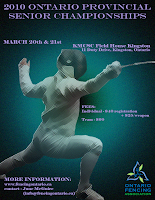 Today was the 2010 Senior Provincial Championships held at the Royal Military College in Kingston put on by the Ontario Fencing Association. My friend, Horia, and I made the three hour drive down, fenced and rolled home that same evening.

The Senior division includes fencers of all ages. Only four of us were 40 or over, two of us, myself included, are in our 50s.

University age or have graduated in the past few years. Basically they were all at least 30 years younger than myself and, as it was the Provincials, a very tough field of competition. Pictured to the right is Hank, Vince and myself, three of the oldest in the field.

My pool looked tough. Two fencers I have never beaten, two I felt would be tough and I had a chance against, and Chacho, a friend from my club, whom I fence tough but have only beaten once.

I lost my first two matches to John and Marcus, both by 5-2 margins. No surprise there. Then Chacho smoked me 5-1. He has been taking private lessons from a former world champion, Felix Becker, and it shows. In my defence, it was 2-1 and Chacho

attacked. I parried (blocked) his attack with my sabre and struck him (reposte ... the entire action of mine is called a parry reposte). Only problem was, his light shone bright green. My light did not register a hit. In the attack, my wire had been knocked off my sabre. His point, damn it. 3-1 for him instead of a 2-2 tie. Would have made a different match, although he fenced great and still likely would have taken me.

I had been watching Adam fence. He was quick and had given Chacho and John some trouble. I was on my game in that one and won 5-0. I was in control the entire way. My last match was against Alex. I should have been able to beat him but lost a heartbreaking 5-4. At 4-4, I decided to attack right off the line, going for a point or simultaneous hit (we both strike at the same time; no points are awarded) and, if it was a simultaneous, do a defensive action on the next go. Problem was instead of attacking his chest, I attacked his blade side, smacked his blade and he struck me.

His light on. His win.

My old coach, Jim, used to see this sort of thing and his words rang in my head ... "Good strategy Gord, poor execution."

In the direct elimination, there was no contest and I finished my day ending up 24th out of 31 entries. Vince ended 18th and Hank 25th.

My other friends in the tournament, Sukveer finished 7th, Chacho 5th, and we had some metal to haul home in the car as Horia took the bronze.

The team event was after. I was the alternate on Team Foster. Horia, Sukveer and Andrew were the starters. We finished second so Horia came home with yet another metal, a silver. Without lifting my blade in anger on the strip, I am in the record book as a silver medalist. They don't award the actual medal to the alternate. Damn it. Still get in the picture though.

It was a great day. Lots of fun, great people and well-organized.

Also a great warm-up to next weekend when I am in Dallas for two North American Cup events, the 40 and over division and the 50-59 division. It'll be good to play with kids my own age. 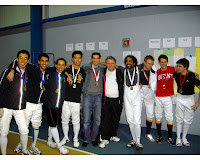