Teena recently was in Halifax to visit her sister. Before she left she asked if there was a craft brewery there that I had heard about and wanted to try.

I first heard about it on Great Canadian Pubs and Beer and on The Bar Towel. Hopefully she would return with some.

The phone rang at work the first day she was away and it was Teena, calling from a Halifax liquor store, standing in front of the beer section wondering which of the Garrison beers I might like. There were 3 to choose from, so I said if it was not too much trouble, bring back one of each. Couldn't ask for more as she was flying back and there were weight restrictions, or I would have said a six pack of each.

So she came back with one of each, in nice big 500 ml bottles. The first one I

was anxious to try was the Imperial IPA.

Garrison Brewery opened in 1997 with their first brew being an Irish Red Ale. They are very proud of the fact that nearly all their equipment was designed and made by Maritime companies, including P.E.I. They brew 7 year round ales and a number of seasonals. This IPA is one of their regular ales.

The Imperial IPA was first made in 2007 for the first annual Halifax Seaport Beer Fest. The company brags that it is the hoppiest beer in the Maritime's and weighs in at 7% APV. That same year it won Gold at the Canadian Beer Awards, and was Beer of the Year at The Canadian Beer Awards in 2008. In 2009 it won a Silver at the World Beer Championships. 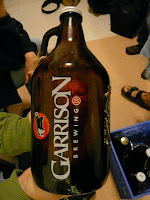 This is a beer that I was looking forward to trying.

The beer poured dark brown and as it is unfiltered, was somewhat cloudy with a nice head that held. I could smell the hoppyness right away. It was surprising smooth when I first sipped it, then I could feel the wonderful hop bite coming through. The beer finished with an excellent lingering bitterness.

I understand why it has won so many awards and is well talked about. This is a beer that I wished was carried here in Ontario, as it would be a regular in my fridge. I would enjoy a growler full like the one on the left. Instead I have to depend on the kindness of others to bring some with them when they visit or return from the east coast.

Thanks Teena!
Posted by Swordsman at 21:12

I detect a hint at the end of the post for your East Coast connections to take beer to Ontario!