Teena and I headed into the city to check out Toronto's newest brewpub, Duggan's brewery at on Victoria Street and Adelaide.

I have been looking forward to this place opening as there has been quite the buzz about it since August on the Bartowel. It open just a couple of weeks ago, with the downstairs and another room still waiting to be completed.

Mike Duggan was a brewer at Mill Street before setting off on his own. His #9 IPA, which he has

been brewing under contract at Cool Brewery, has been a hit with the beer geeks for awhile now and I was looking forward to trying it.

The room is all original brickwork, with lots of windows which makes it nice and bright. I must say that the service was excellent and we were well looked after.

We split an order of wings, which came with creamy coleslaw. I love coleslaw but didn't care for this one. The wings, though, were large and delicious, with a very nice Asian heat to them. I would definitely get them again but would want the whole plate to myself.

The beer was worth the walk into town.

Teena and I both started with the German Pils. I liked it. It has a pleasant clean taste and a slightly hoppy bitterness to the finish. Teena thought it was okay ... she does not like hoppy beers. She switched over to the Asian Lager, which is brewed with rice and barley. It was a sweeter beer with a surprising buttered popcorn aroma and taste. She said she enjoyed it.

My next beer was the much anticipated #9 IPA. The brewery is quite proud of this as their display case shows. It uses 9 different malts and Cascade Hops, which

are a stronger, more bitter hop. It is dark brown ale, with a great aroma and better taste. It is a strong tasting ale, with great balance between all the malts and hops, and finishes with the nice hoppy bitterness which I enjoy so much.

Next up was the London Porter. It is black in colour and was very delicious. It is not a beer you can drink all night due to its heaviness but had a tasty coffee/chocolate taste. This is a beer that I will have every time I visit Duggan's.

I could not have the porter without trying the #7 Stout. The stout came with a creamier head but I found the taste was more like a watered down version of the porter. As I sipped it, I longed for the porter instead.

Duggan's brewery is a great addition to the Toronto brewpub scene. I foresee this place being a continued success and, yes, I will be visiting there in the future, especially when they open their onsite brewery store.

Here are some more pictures ...

The beer is brewed onsite in the downstairs brewery area.

Teena with the beer menu and the German Pils. 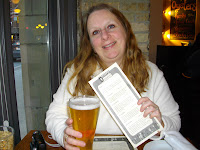 The London Porter and the Asian Lager.