Off to Ottawa for The Governor Generals Tournament 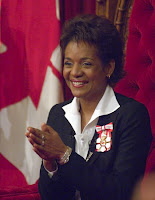 Tomorrow I am skipping off work early and rolling down the highway to attend the 46 Annual Governor Generals Fencing Tournament. The Right Honourable Michaëlle Jean, our current Governor General of Canada, is pictured.

This is a high level tournament attracting many excellent fencers from Quebec and Ontario with a rich history. Once upon a time, it was considered more of a black tie affair attended by politicians and high level persons.

I heard a story that took place many, many years ago that a fencer who previously worked on the Avro Arrow project, before Prime Minister Diefenbaker shut it down, met Mr Diefenbaker at the tournament. He had always said before the meeting that if he ever met that man he would let him have it good!. Instead Mr Diefenbaker was so smooth that the fellow took a liking to him and became a fan. I can see why. I always liked Dief the Chief.

This is the first time I have entered and there are 25 entered in my division. Saturday will be a tough day. It's not a veterans tournament. It's one for all age groups. My prospects do not look good but I hope to maintain a good strategy, good execution, and let the fencing gods decide my fate.

It ultimately will be a fun day and a great learning experience and, of course, a pub or two to explore after.
Posted by Swordsman at 18:41