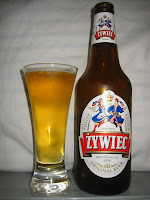 It was 1973. Each week, my buddy, Kenny, and I would head on down to the LCBO and find an imported beer to try. We would choose a brand and buy 4 bottles between us. You see, this thing I have for trying beer is not just a new thing. It was fun for awhile. We didn't keep notes but found some enjoyable ones, and some we didn't care for much.

Then came Zywiec! Why not try a Polish beer? A new beer, another country to discover. So we came home with two bottles each of Zyweic, let them chill in the fridge overnight and then cracked one open each to give it a try.

We both had a sniff and what the heck was that smell? It wasn't a skunky smell but it was familiar. What was it? Couldn't put our finger on it. I think it was Kenny, who worked construction, who finally identified it ... tar!

We both sniffed again and agreed ... tar!

So what the heck, how bad could it taste?. Surely it couldn't taste like tar. We had a rule that we always had to take the first sip at the same time so we clanged bottles and had a swig.

I remember neither of us could get through the bottle and we dumped them. And with that came the end of international beer tasting. We never did buy another foreign beer.

What happened to the other two bottles? I tried them on some unsuspecting guests who also claimed it tasted like tar and down the drain they went.

They say that smell holds the greatest memory in a human. Maybe it does. For I have seen the Zywiec signs hanging outside of Polish restaurants and pubs and it always triggers that same old memory ... the smell of tar.

I finally got the courage to buy a couple of bottles three weeks ago, determined to give it another change. Bottling methods are better. Shipping and handling have improved over the years, and would all those places really be selling tar-flavoured beer?

It did take three weeks of cowardly picking up the bottle, holding it in my hand and then putting it back to have something safer. Finally last night I summoned up the gumption to give it a go.

I cracked the lid and had a sniff. No tar. In fact, it smelled of beer.

I had a taste. It is a lighter tasting beer with a bite of a hoppy bite to the finish. Not a great beer, but not a bad beer. Pretty ordinary but enjoyable. Zywiec has redeemed itself. Although I wouldn't buy another for home, I would like to try it on draft at a pub sometime if it does come in draft form.

Zywiec! It's better than tar.
Posted by Swordsman at 18:12

I had the opportunity to taste this stuff while traveling in Poland . . . turns out that if you get your hands on it before it leaves the country it isn't all the bad of a beer!