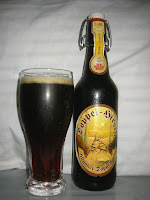 Made in Germany
By: Hoss Brau-Und Vertriebs Gmbh

So I bought a couple. I know not to judge a book by its cover but what the hell!

I did my best to research this product and the Hoss Brau-Und Vetriebs before I did a tasting but could really find nothing except for other reviews. I did find out that the brewery is 350 years old and would definitely like to know more about it. But as great as the Internet is for research, I could find next to nothing.

Even though it is at the end of April, the weather was surprisingly cool which is actually when one would like a Doppelbock-style of beer. According to The Beer Hunter website, which is so excellent as a learning tool for beer, a Doppelbock is a "German extra-strong bottom-fermenting beer, tawny or dark brown. Around 7.5 by volume or stronger. Southern speciality, seasonal to March and April. Names usually end in -ator".

I popped the top and had a pour. The beer does pour with a nice head. It is a dark coppery colour with a inviting fragrance.

In tasting it, I can see why this is considered a cold weather beer. It has a heavy, sweet, malty taste which reminded me of caramel. It is an excellent sipping beer, not one you would have too many of. In fact, as much as I enjoyed it, I saved the second bottle for another time. As it is not bottle conditioned, that time will be in the next few weeks.

Soon the summer season will be upon us with its heat and humidity and this beer definitely would not be the thirst quenching style of beer needed for one to survive the wicked Toronto summer heat.

As soon as the fall comes though, it will be time to roll on down to the LCBO as this beer would be a nice way to start a weekend after a chilly walk home.