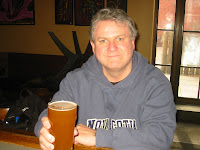 This weekend is the Cask Ale Crawl. It runs from Friday night 'til Sunday with six pubs featuring cask ale from over a dozen different Ontario breweries.

The pubs that are taking part are Granite Brewery , Victory Cafe, Volo, C'est What, Mill Street Brew Pub and, in my neighbourhood, The Rhino. At each location, you receive a new stamped passport or can have your passport stamped. A full passport would place you into a draw. I have my stamped passport from the Rhino.

Each pub has a a variety of cask conditioned ales to sample. As the Rhino is in my hood, I wandered down in the late afternoon to have some tastes. The Rhino had advertised they would have Black Oak Pale Ale (which I love in the bottle and is a regular in my fridge), Cheshire Valley Dry Stout, and County Durham ESB. I wandered down to try all three.

When I arrived, I saw they also had a Scotch Irish Corporal Punishment on cask. The bartender explained that as they already had Durham County on Cask, they brought in another. Great selection as I love the Scotch Irish Sgt Major, which is another regular in my fridge

I first sampled the Black Oak Pale Ale, which I quite enjoyed. I like the bottled version better as I find it hoppier. Next I had a pint of the Corporal Punishment which pours out cloudy and stays that way. It is hoppy and bursting with flavour.

I was going to end with the stout but instead decided to go to County Durham. Bad decision. I can't judge the County Durham as it could not stand up after the strong bitter hoppiness of the Corporal Punishment. The stout probably could have. 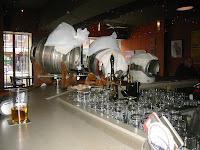 Great pricing too. Three beers for a little over 17 bucks. Gotta like that.

I had a great time! The barkeep was friendly, I got some reading in and met an associate brewer from Black Oak.

If you like beer, then maybe head on down to one of the locations. It is worth the trip.
Posted by Swordsman at 19:14