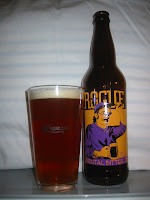 Made in: Oregon, United States
By: Rogue Ales Brewery

There is a website called "The Bar Towel" which has many discussion boards on beers, bars, brewing and other beer related topics. I post there under Rumrunner, if you ever happen to venture there, which I recommend that you do.

When I was on "The Bar Towel" website a week ago, someone had announced with great enthusiasm that that the LCBO had brought in Rogue Brutal Bitter. It was followed by many favorable comments and great flavour descriptions. When I read "This is the beer that really got me into American craft brews" and "It's better with each time I try it.... I've already gone through 5" I had to give it a try!

Rogue has been brewing beer since 1988. In 1989 they were looking to move their operation and went searching through Oregon.

The legend says that it was February and Jack, the founder, was a snowstorm in Newport and met up with Mohave Neimi, owner and founder of Mo's Clam Chowder, which is quite famous in the region. Sitting in her restaurant and talking over a bowel of her clam chowder, she told Jack of her dream to one day living above a bar.

When she heard that Jack was looking to relocate, she said she owned the perfect spot, which was available, large, and had 3 apartments above it. Mo then gave Jack a great deal, under 2 conditions. One was that he always "feed the fisherman" which is give back to the community. The second, was the bar was to forever display a picture of Mop, naked in a tub. Sounds like a fun gal.

The picture still hangs just to the left of the bar.

Wow! Is it delicious! It pours with a nice head which remains and has a terrifically balanced, hoppy bitterness to it, which happily does not fade away but remains in the finish. This is a beer which I enjoyed greatly. Nothing about the taste is brutal. This tastes as a bitter should taste.

It is far more expensive than other beers in it's class but is quality. It breaks down to $3.33 for a regular sized bottle of beer. For this reason, it would not be a regular in my fridge but would always be a welcome occasional visitor.
Posted by Swordsman at 15:40