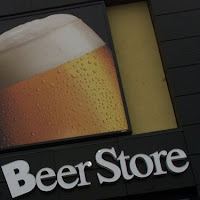 Derek Forward, who describes himself as "just a private citizen," has started an online petition in hopes of forcing the Ontario government to break up The Beer Store near-monopoly.

"Everyone I know has long thought this thing should be changed," Forward said, adding that the now-foreign-owned chain enjoys a virtual monopoly over beer distribution in Ontario with very little government oversight.

In a bid to get things moving, the 49-year-old machinery broker from Burlington has set up an online petition asking people to support his call for change.

"I was going to do the petition the old-fashioned way. Collect signatures on paper. Round up a bunch of people and stand outside every beer store in Ontario for a weekend. Have a weekend protest. Supply them with a sign and then present it to the Ontario government when they resume sitting in September," he said in a telephone interview yesterday. He may still do that as well, he said. For now, though, he's testing the waters at ipetitions.com/petition/nobeerstore online.

Read the entire Toronto Star article here.
Posted by Teena in Toronto at 08:53