One of the Doors Open events we checked out today was the Gladstone Hotel, which is in our 'hood.

Some history about the Gladstone:

* The Gladstone Hotel is the oldest continuously operating hotel in Toronto.
* The Gladstone was originally built in 1889 as a stylish hostelry across from the then existing Parkdale railroad station which serviced the Grand Trunk, the Canadian Pacific Railway (CPR), and the Canadian National Railway (CNR) companies.
* The original owner, Susanna Robinson, was a widow who operated and lived at the hotel with her 13 children. In fact, the hotel as always been operated as a family enterprise and continues to do so today under current ownership of the Zeidler family.
* The Gladstone was one of the first ten hotels in Ontario to receive permission to allow patrons to drink and play shuffleboard in a licensed alcoholic area.
* At one time the Gladstone Hotel was the last place to obtain hard liquor before reaching The City of Hamilton.

Excellent tour! We did it four years ago before they started their renovation and so much has changed!

We had a couple Steam Whistle in the Melody Bar after the tour. 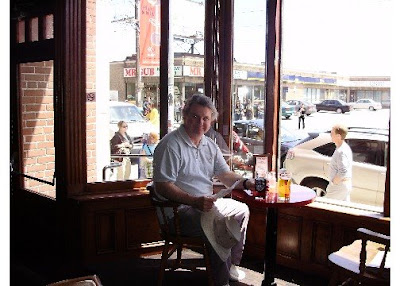 Here's the Gladstone Hotel ... and there's Gord standing in the window of the Melody Bar! 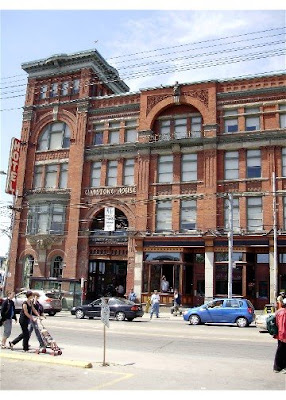