In February, the Ontario Library Association is putting on the province's largest book fair, Super Conference 2021. As with every event these days, the event will be a virtual one. My publisher, Bookland Press, will be in attendance with a virtual booth where I'll be putting on two author events.
The first will be from 1:00 pm to 2:00 pm on February 4, 2021, where I'll be talking about my novel, Saving Tiberius. 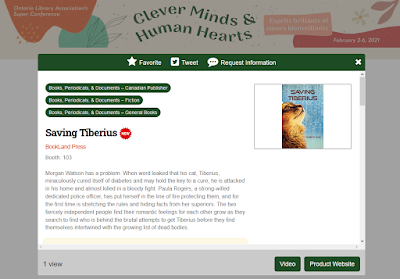 Morgan Watson has a problem. When word leaked that his cat, Tiberius, miraculously cured itself of diabetes and may hold the key to a cure, he is attacked in his home and almost killed in a bloody fight. Paula Rogers, a strong-willed dedicated police officer, has put herself in the line of fire protecting them, and for the first time is stretching the rules and hiding facts from her superiors. The two fiercely independent people find their romantic feelings for each other grow as they search to find who is behind the brutal attempts to get Tiberius before they find themselves intertwined with the growing list of dead bodies.
The next day, February 5, again, from 1:00 pm until 2:00 pm, I'll be discussing my non-fiction, Defending the Inland Shores. 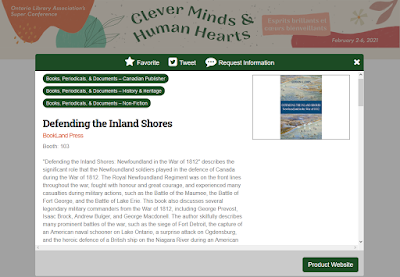 Newfoundland played a significant role in the defence of Upper Canada during the War of 1812. "Defending the Inland Shores: Newfoundland in the War of 1812" tells this incredible story. The book describes many key battles, including the siege and capture of Fort Detroit, taking of an American naval schooner on Lake Ontario, a surprise attack against Ogdensburg, New York, and desperate defence of a British ship on the Niagara River during an American night assault.

I hope you will join me.