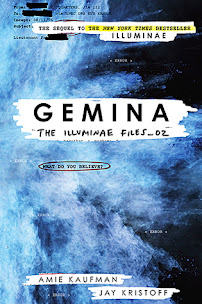 There is a three volume Sci-fi series called, The Illuminae Files. I finished the first volume, Illuminae, back in January. Today, I finished Volume 2, Gemina.

Moving to a space station at the edge of the galaxy was always going to be the death of Hanna’s social life. Nobody said it might actually get her killed.

The sci-fi saga that began with the breakout bestseller Illuminae continues on board the Jump Station Heimdall, where two new characters will confront the next wave of the BeiTech assault.

Hanna is the station captain’s pampered daughter; Nik the reluctant member of a notorious crime family. But while the pair are struggling with the realities of life aboard the galaxy’s most boring space station, little do they know that Kady Grant and the Hypatia are headed right toward Heimdall, carrying news of the Kerenza invasion.

When an elite BeiTech strike team invades the station, Hanna and Nik are thrown together to defend their home. But alien predators are picking off the station residents one by one, and a malfunction in the station’s wormhole means the space-time continuum might be ripped in two before dinner. Soon Hanna and Nik aren’t just fighting for their own survival; the fate of everyone on the Hypatia—and possibly the known universe—is in their hands.

But relax. They’ve totally got this. They hope.own survival; the fate of everyone on the Hypatia—and possibly the known universe—is in their hands.
I found the first 100 pages of the 658 page book, slow moving and boring, It was necessary as it provides a background to a few of the main characters. After that, the story moves into hyper-drive. Don't let the 658 pages intimidate you. This is a fast reading book with the story laid out in a unique fashion. Many of the pages are texts between the characters, pictures or effects.
Confused? You'll need to read it to understand what I'm saying.
Written as Young Adult series, this is a great read for any fans of the Sci-fi genre. I already have and am looking forward to reading the third book of the series, Obsidio.
Posted by Swordsman at 12:56