My April 2016 Amazing Clubs Canada Beer of the Month Delivery 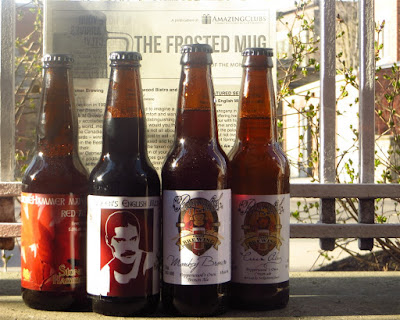 Tonight I came home and found that my April Beer of the Month Club package had arrived. On her way home from work, Teena swung by the post office to pick it up. Thanks, Honey!

So what was in this month's box?

There were three bottles of Cream Ale from Pepperwood Bistro and Brewery. Teena and I have planned to take the GOTrain to Burlington to try out this place this summer. The brewery also sent along three bottles of Monkey Brown Ale. Fun name!

Also in the box were six bottles from StoneHammer Brewing. Three are Red Maple Ale and the other three are Queens English Mild Ale. Yes, that's Freddy Mercury on the label.

Lots of fun beer to sample!
Posted by Swordsman at 19:36