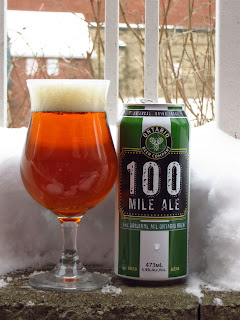 There was a Canadian book written back in 2007called The 100 Mile Diet. The idea was that the married authors would spend an entire year only eating foods grown or produced within a hundred miles of their home, much like the early settlers of the 1800's. Among the things they could no longer enjoy was beer!

Many others have tried this way of living and this has become a fashionable diet for many people to live on. I like the idea but would not be able to commit 100% to this diet.

Turns out that if I did try this way of living, beer would not have to be taken my list as there is a new brewery called The Ontario Beer Company that make a 100 Mile Lager and a 100 Mile Ale. Of course it is the Ale that I am most interested in.

From their website: The Ontario Beer Company started as a casual conversation between a brewer and a farmer in 2007. Hops were planted and the long journey began. It now represents a unique partnership between Ontario brewers, hop growers and barley farmers. We promote the viability of locally sourced ingredients and bring an authentic, locally made beer back to the Ontario market. Brewed using only select Ontario malted barley and freshly harvested Ontario hops; the 100 Mile Ale and Lager are Ontario’s truly local beers. The recent resurgence in hop farming in Ontario is largely what has made this project possible.

The 100 Mile beers represent a return to the day when brewers would source all of their ingredients locally from within the community and is a return to sustainable brewing practices. When drinking 100 Mile, you’re not only choosing the freshest local option available in Ontario, you’re also supporting the local artisans and farmers behind it.

I really like the idea of supporting local farmers and have always done my best to support local brewers. Now I have a beer that does all that! The brewers behind this company are Michael Duggan of Duggan's Brewery and Brad Clifford of Clifford Brewing. 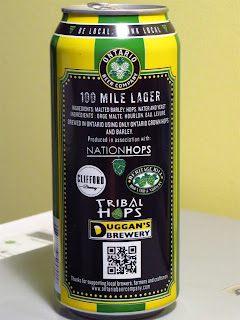 It's a 5% APV brew in a 473 ml can with the hop producing companies shown on the back.

It pours a coppery colour with a nice slightly thick off-white head. The beer must be dry hopped (hops added in at the end of the boil for aroma) as there is an excellent hops to the nose appeal. Lot's of lacings are left along the inside of the glass as I expected

The beer starts of with a little bitterness that increases right through to the finish. It's not an overly bitter beer but a with just the right amount that makes it very sessionable. It's a beer that I like very much and will buy again.

The website says that this beer is available in cans for a limited time. I hope not as this will become a regular in my fridge.