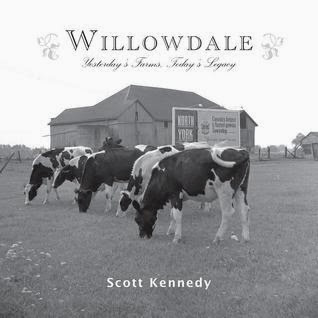 I was born in the mid-fifties in Willowdale and lived there until I was twenty four, so when this very new book, Willowdale, Yesterdays Farms, Today's Legacy, came out just this month I grabbed it.

In 1855, Willowdale's post office opened in Jacob Cummer's store on Yonge Street. Today, streets in Toronto's community of Willowdale are peppered with the names of the early farm families of North York, such as the Shepards, Finches, and Kennedys.

Author Scott Kennedy's intriguing stories embrace the evolution of Willowdale from the earliest acquisition of land to today's urban environment. You will read about combat training for the ill-fated Rebellion of 1837 that took place in the community fields; about Mazo de la Roche's estate, Windrush Hills, which stood at Bayview and Steeles, and is a Zorastrian temple today; about the Kingsdale Jersey Farm, which was located on Bayview until 1972; and about Green Meadows, the estate of "Bud" McDougald, which was the last operating farm in North York.

I read a lot of non-fiction books and must commend the author Scott Kennedy for the amount of work he did to put this book together. It is one of the best researched books I have ever across.

We lived until I was eight on Spring Garden Ave on the North-east side of Bayview and Sheppard before moving to a new home in a very new neighborhood on the east side of Leslie St about half way between Finch and Steeles. The new neighborhood was quaintly call "Hillcrest Village". There was our house, and a couple of streets over Kevin and Craig's parents home, guys that I still am friends with to this day and maybe four or five other homes. The first night a farmer cam and knocked on our door looking for his lost cows.

Turns out Hillcrest Village was built on land originally owned by the Johnston family who had been granted a section of land there by the crown and continued to buy land in the are until they owned most of the area. It seemed the kids ran a series of farms plus a mill. The area was known as the Johnston Family Farms. It was so interesting reading about the history of my own neighborhood where I grew up.

I also really enjoyed the chapter on The Somewhat Bizarre tale of Donald Springer who built a beautiful home in the south-west area of Finch and Leslie. The chapter tells the story of the home he built out out of a barn. I always thought it was a great place! Another chapter Bud McDouglad and Green Meadows I also found extremely interesting. He own the mansion on the east side of Leslie south of Finch. I still remember horses grazing on the side of the hill and the huge race track on the south-west corner of Finch and Leslie he used to train horses.

The book is not only well researched but also very well written. The pictures are great, and if I have a complaint, I only wish there were more of them. Some brought back many memories.

I really don't think the book would be of interest to anyone except those who lived in Willowdale or have an interest in the history of the different neighborhoods of Toronto, but many people have live in Willowdale over the years and I hope this book does very well.

I certainly enjoyed it!
Posted by Swordsman at 11:19