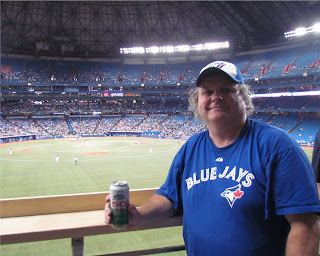 Prevning: the time which is not clear between afternoon and evening. this period differs from one place to the other due to the spherical shape of earth, hence the reception of sunbeam. the term is coined by Sheldon Cooper, in The Big Bang theory. "ohh.. its 4.30pm. that's pre-evening."

I bought my seat in the first row just above the Jay's bullpen. My seat was just above the good hands symbol which gave me a great close up look at the Jays starting pitcher Mark Buehrle warming up. 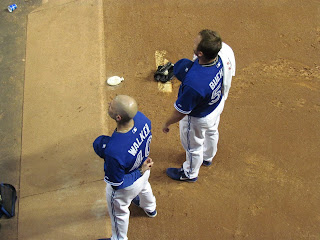 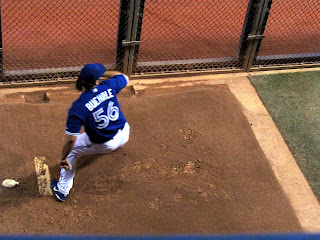 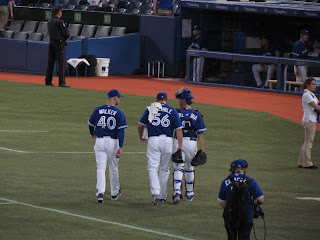 The Blue Jays bullpen hope for a restful night. Buehrle lived up to his reputation of pitching long into a game by going 7 innings and giving up just 2 runs on 4 hits. 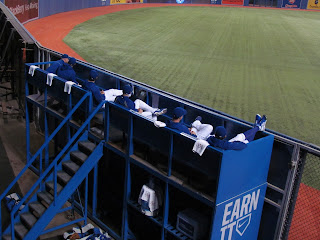 Buerhrle's first pitch was a swing and a miss. 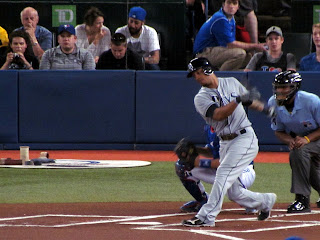 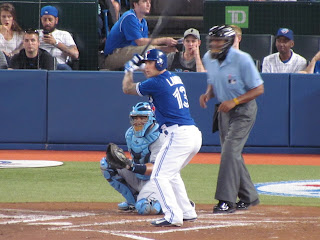 After a couple of innings I went up to the new stand-up bar area in centre field which used to be the old useless Windows Restaurant.. On the way there I saw a new display, which doesn't feel quite complete. For one the bat is set the wrong way around so the names are upside down. 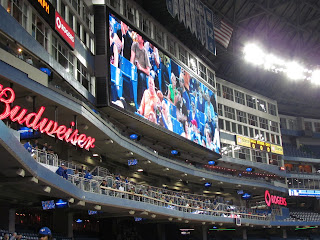 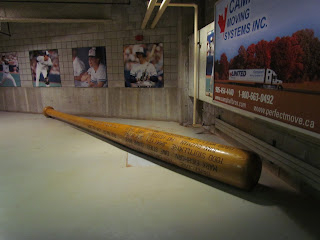 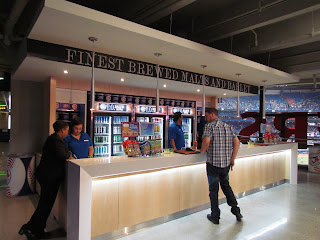 I did get a good shot of a Mark Buerhrle pitch from there. 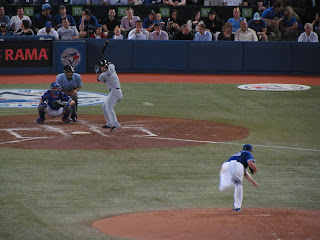 OK. I moved over to the 3rd base seats for the final couple of innings. The Jays were tied 2-2, Jose Batista had homered in the bottom of the 4th to tie the game. Casey Jansen, the Jays closer came in for the 9th inning and did what is unusual for him. he gave up a run.

Going into the bottom of the 9th though, the strength of the Jays lineup was coming to bat. 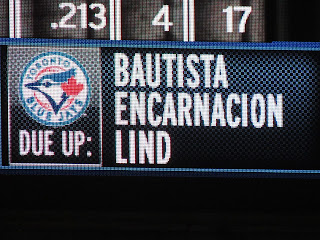 With the Rays big stopper Fernando Rodney on the mound, Bautista came up and crushed his 2nd home run of the game. I wish i could say I caught the ball coming off the bat, but i did get the end of his swing. 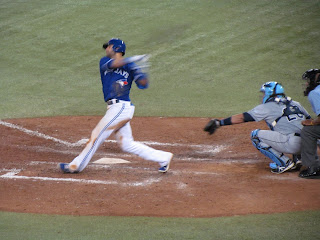 Game tied and off to the 10th inning.

The Rays started with a single, which was wiped out by a double play. Desmond Jennings, who has been playing well for the Rays, then grounded out bringing the Jays to bat for the bottom of the 10th.

Colby Rasmus, hit a dribbler but his hustle forced an error at first. Nobody out and the speedy Rasmus standing at first. 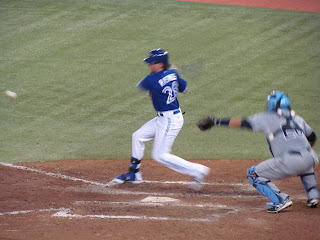 Bonifacio then came up to bunt Rasmus to 2nd. With 1 out, fan favorite Kawasaki came to bat, grounding out but sending Rasmus to 3rd. The Jays brought in pinch hitter Mark DeRosa who forced a walk, so with Bautista coming to the plate, there were now 2 out and the winning run at 3rd.

Bautista came through on with no balls and 2 strikes on hi, reaching out and slapping a single. The crowd went wild, and I did too, resulting in a bit of a fuzzy shot of the moment. 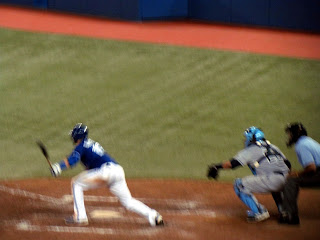 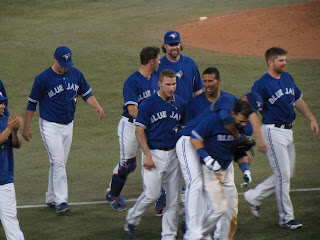 The Blue Jays win with a Bautista walk off single taking the series 2 games to 1. It was a fabulous way to enjoy a prevning!