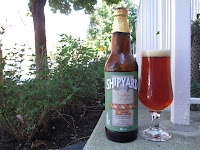 I heard that the LCBO was going to feature beers from Shipyard Brewing in their fall release and was happy to see a selection of their brews on the shelf of my local store.

Having heard many good things about this brewery, I was anxious to give them a try. There was a pumpkin beer and a barley wine which didn't interest me and I wasn't in a porter mood. They did have a Pugsley's Signature Series XXXX IPA, though. I love IPAs and came home with a couple of 625 ml (21 oz) bottles.

I'll air this complaint again. If a brewery brews a 9.3% beer like this one is, put it in a regular size bottle. More and more breweries are putting their high octane brews in big bottles. Nice if you're sharing, but if you are having one just for yourself, it's a little much!

Shipyard brewery originally opened as Federal Jack's Restaurant & Brew Pub in 1992 in the seaside village of Kennebunkport Harbor, Maine, and in two years had to expand to a larger location. That year they moved to Portland and renamed the brewery to Shipyard Brewery. It now is Maine's largest craft brewery and the 16th largest craft beer brewery in the U.S. Alan Pugsley, who this series of beers is named after, had just come over from England when he was hired on by Fred Forsley, the owner. He has been the head brewmaster from the beginning when the original brewpub first opened and has been there ever since. Time for a taste!

The beer pours cloudy, as it is unfiltered, and coppery in colour.  The head is an off white colour. There is a very malty aroma to this one and I notice the absence of any floral hops. There are nice lacings left behind on the glass when I sip.

I expected a strongly flavoured beer and this one did not disappoint. It starts with a heavy malt taste which yields to some bitterness in the finish but not much. The heavy malt taste stays with me for a long while.

This is a well-made beer but as much as I enjoy IPAs, this one is not for me. The brewery has a couple of other IPAs and an English bitter that I would love to try. This one though is just too malt-forward for me.