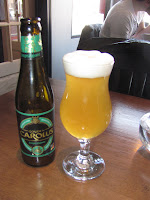 Teena and I were at the Monk's Kettle today which advertises itself as a craft beer emporium. Hey, they do keep up those standards!

On the menu was a beer called Gouden Carolus Hopsinjoor from Belgium. I had to give it a try.

Although this beer has only been around since 2008, the brewery Brouwerij Het Anker (The Anchor Brewery) is much much older. In 1471, Charles the Bold (I love that name!) granted the beguine sisters of Mechelen permission to brew beer but only for their private use. It seems that this went on for 400 years until Louis Van Breedam bought the brewery and modernized it in 1872.

It sounds like the brewery brewed nothing but lagers until after the second world war and in 1945 decided to start brewing ales. In the 1960s, the ale line was renamed "Golden Carolus" and became so successful the brewery decided to drop the lager line.

So, what about the beer? 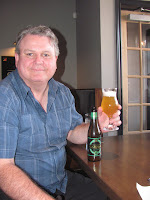 It pours a cloudy straw colour due to yeast added into the bottle before capping to allow the beer to continue to ferment (called bottle conditioning). The head is very white and reminds me of a meringue you might find on a pie. The head is tall and takes a long while to dissipate. The beer is very lively in the glass and there is a sourness to the aroma.

Sediment lies in the bottom of the glass. The weird thing is some of the sediment is reddish in colour. I have no idea where this might have come from.

The beer starts sour in my mouth and the sourness intensifies throughout the finish. This is a beer I could only have one of, not because of the 8% APV but due to the sourness. One would be refreshing but more would be too much.

I was used to the sourness by the time I finished but am unsure if I would ever try another one of these. I definitely would try another beer from this brewery but think I would pass on this one, only because I am not a fan of sour beers. Someone who enjoys a sour beer I think would love this.

***
Notice the red specs floating near the bottom of the glass 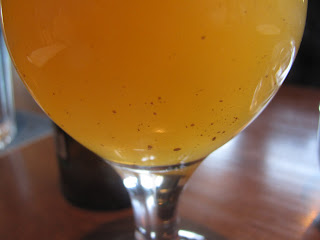 On pouring near the end of the bottle one also found it's self in the head. 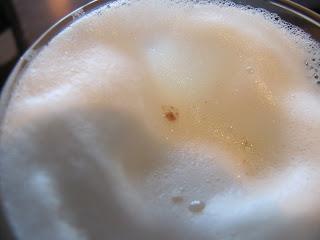