Beer of the Week - Fullers Past Masters

They are now doing something unique. Re-creating beers using some of their old beer recipes which they call Past Masters. "The Brew Book has been the bible of brewing at Fuller's since 1845. Every recipe of every beer ever brewed at the Griffin Brewery has been recorded in meticulous details, documenting the profound skills of generations of Master Brewers.

Today's Master Brewer, John Keeling, will be recreating a number of epic ales, named 'Past Masters', with those precise recipes from the Brew Book.

Sourcing ingredients as close as possible to those originally used, each Past Master will be brewed with traditional techniques to recreate a truly authentic taste.

Only one Past Masters beer will be brewed in a single batch for each release. Each will be unique in its character, and will be a very special opportunity for beer lovers to taste the beer of our forefathers."

I have two to try. First up is XX Strong Ale. 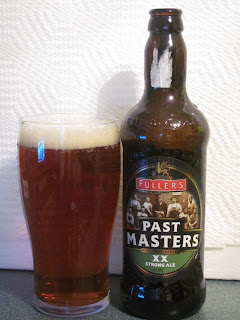 "The first beer in the Past Masters series we have chosen to recreate is XX, a strong ale which is perfect for bottle conditioning. Brewed at 7.5% ABV, with the original recipe first used on September 2, 1891, it is dark, rich and full flavoured, with a distinctly warming character."

Time to taste some history!

The Strong Ale pours a coppery colour. The head has a brownish tinge to it and it smells a little malty. Lots of lacings are left on the inside of the glass, which was expected.

The beer starts with a slight bitterness which expands and stays throughout the finish. I can tell that there is lots of malt to balance the bitterness. It is not a smooth beer, but one with a bit of an edge, a bit of a bite. No doubt how they like beer back in 1891.

I also noticed that the warmer it got, the nicer it got!

I'm glad I tried it. It was an enjoyable experience and a good beer. 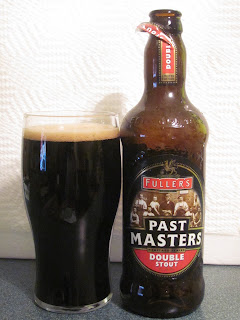 Now the Double Stout. "Past Masters Double Stout is the second in the series, brewed to a recipe from 4th August 1893 – a time when 'stout' meant 'strong'. Its signature ingredient is Plumage Archer barley, carefully malted and kilned using 19th Century methods. Dark, brown and creamy this beer is brewed to 7.4% ABV and balances a rich fruity aroma with smoky, bittersweet chocolate notes."

This stout pours very black. There is no seeing through this one. A hint of chocolate does come to the nose. I had expected a coffee aroma, as this is what I usually find with roasted malt, but not this time.

This has a very silky texture to it. I guess it is what they refer to as creamy, which works for me too. I had also had expected overwhelming roasted malt flavour and some alcohol taste, but no, for a 7.4% APV stout, it is a very nice subtle taste to it. No hint of alcohol taste in this. there are lot's of chocolate tones in this one. very nicely balance. A very nice stout!

I am unsure as to what Fullers will be coming out with next in this series, but if they come to Canada, count me in.

Tasting a beer brewed the same way as it was over a hundred years ago is fun. Who says history is boring!