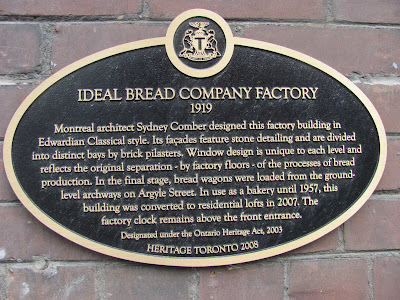 I cannot walk by a historic plaque without having a read. So I thought, why not take a picture to share with others?

This plaque was placed by Heritage Toronto on what is now a condo building. It is located on Dovercourt between Queen and Dundas. I am very glad they did not tear down this great old building or do anything to deface the integrity of the exterior. 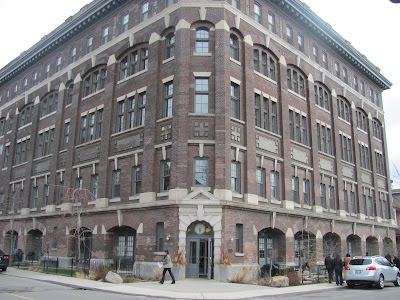 They kept the original factory clock above the main entrance 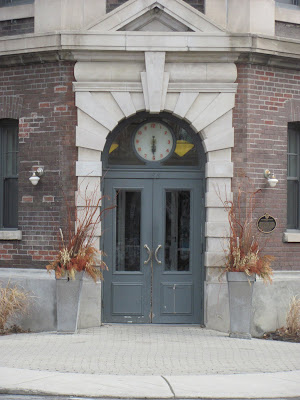 History of the building:

The property on the northeast corner of Dovercourt Road and Argyle Street (formerly Cedar Street) was initially developed in 1873. The following year, John Dempster acquired the site where he operated a grocery store and bakery. His family retained the land and the business until 1909 when the property was sold to three bakers.

Brothers William H. and Charles S. Carruthers, with a new partner Robert S. McMullen, expanded the property through the acquisition of land to the north in 1913. The folliowing year, the partnership officially named their business the "Ideal Bread Company". In 1918, building permits were issued for a new factory that was completed by August 1919 and illustrated in the January 1920 issue of Construction magazine. The Ideal Bread Company Factory was designed top to bottom to accommodate the interior uses. The penthouse level on the fifth floor originally contained an assembly hall with a stage and seating for 400 people that was used by the employees and, on occasion, the public. After mixing on the fourth floor, dough was shaped on the third level where the extended ceiling height accommodated two “travelling ovens” that produced up to 7000 loaves per hour. The finished product was conveyed to the second floor for packaging, then transferred to the first floor where wagons delivered supplies and removed bread and baked goods (produced on the second storey) through the round-arched openings.

The Ideal Bread Company amalgamated
Posted by Swordsman at 11:49