This weekend, the 2011 Provincial Fencing Championships are being held in the Field House of the Royal Military College in Kingston.

My events were held yesterday and I knew it would be an exhausting day. I planned to drive down and back the same day and compete in the Veterans Sabre (over 40) and the Senior Men's Sabre (open to all ages) events.

I was up bright and early at 6, ate a quick breakfast, packed my gear into the car and headed off. Check-in for the Veterans was 10:30 and seniors 11:30, and I checked in for both when I arrived.

The veterans event got underway at 11:30. I was a little nervous as I had some concern about my elbow and had not practiced much in the past 3 months. One thing going for me was going to Detroit to fence in 2 NACs, which provided me with lots of intense competition.

My footwork was good throughout the day and I attacked well. At the end of the pool, I had 2 competitors to get through to get to the gold medal match. I was hot in my first match against Paul, winning that one and next up was Mark.

Mark has a very unique defensive style, excellent distance and can be very tricky to fence. He used to have his way with me until a year ago when finally I figured hm out. Then it was my turn to stack up the wins against him, which I did until the Vet Capital Challenge, where he took me apart. 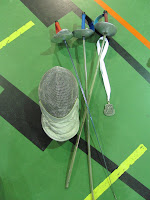 Now he stood in my way to the Gold medal match, in a bout to 10. It started well as I built a lead on him but then he had my distance figured and kept scoring with cuts to my right hand. In horror, I found myself down 9-5 with no room for error.

It was time for an adjustment. I went and changed my attack concentrating on just the point in question at the moment. The last point didn't matter, neither did the next. I could only concentrate on this point.

It may be the best 5 points I ever fenced and won 10-9! I was happy and very proud of my comeback. Those who watched came over to shake my hand and congratulate me. It felt good.

So it was to the Gold Medal Piste for the Gold medal match against Henk, from Kingston Fencing Club. He has been fencing for 40 years and knows a thing or two. It wasn't much of a match as he blew me away by a 10 - 2 margin. There is a move called "a point in line", which he does well and I could not handle. I will be working on this in practice in the upcoming weeks.

I called this post a fencing marathon for a reason. I had just finished shaking hands with Henk and congratulating him on his well deserved win, when I heard my name called for my first match of the next tournament. Not 5 minutes had passed from finishing the Veteran event and I was on the piste fencing in the next.

I was 2 wins and 2 losses, and feeling pretty good but was slaughtered in my next 2 bouts. As I was wiring up for my last match with James, a student from Queens University, I heard the medal presentations were happening for my Vet's event. The judge excused me from the piste and I jogged over 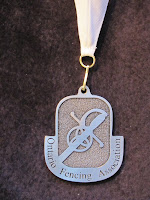 to receive my medal. Afterward, I quickly shook everyone's hand and jogged back for my last match.

The 6 fencers I was competing with in my pool all came over to congratulate me before I jumped back on the piste to compete in my last match of the pool, which I lost 5-3.

Ten minutes later I faced James again, this time in an elimination bout to 15. I was leading 8-5 at the break but then he changed his game and admittedly I was tired, more from not being in the condition I wanted be in than the long day and he took the match 15-9. As we shook hands, I said to him, "At least I threw a good scare into you" which he laughed and said that I sure did.

It was a fun but very exhausting day. I am not doing much of anything today.

Gaby and Eli from Bladeworks, fenced in Veteran foil. I couldn't get them to stand still for a shot. 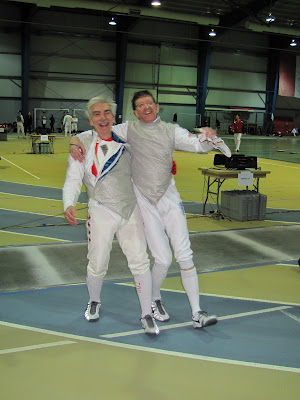 Gaby on the left, on the attack against Felice 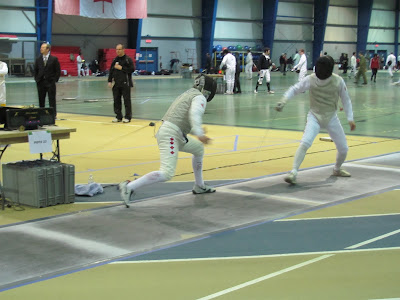 Simon, on the left, from Bladeworks on the attack against Felice 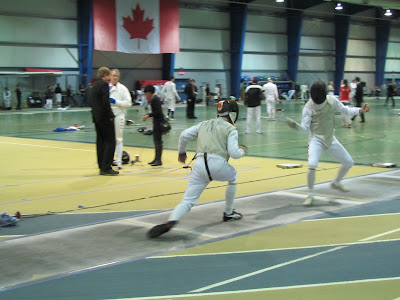 Being presented with my Silver medal. 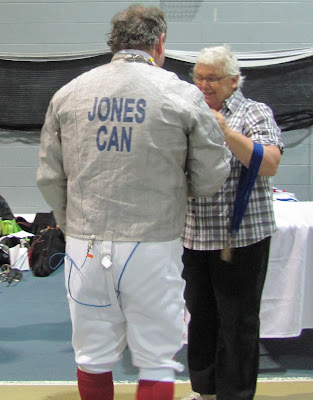 From left to right, Mark and Rob, Bronze medallist,
me with my Silver and Henk with the gold. 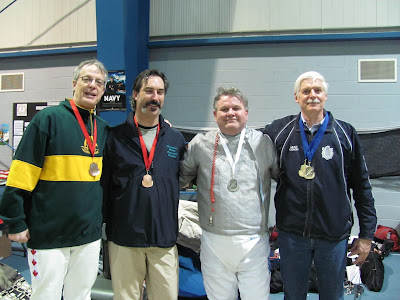