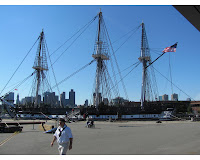 When I was originally planning this trip, I was very excited to find that the USS Constitution made it's permanent home at the Charlestown Navy Yard in Boston.

I have a huge interest in the War of 1812 and this ship played a role as it went against the powerful British Navy in the Atlantic.

In its first action of the war, it took on the HMS Guerriere, which had never been defeated in battle.

The sides of the Constituiton are made up of 2 types of oak in 3 layers. The first layer is a lighter oak which aids in flotation but does not provide much protection. The middle is a heavy oak, which is so heavy it does not float. This is a firm oak that can withstand a cannonball, which would either embed itself in the oak layer or bounce off. During the battle with the Guerriere, British sailors saw their cannonballs bounce of Constitution's sides. It is said that one American sailor heard one British sailor shout, “Huzza! Her sides are made of iron!” 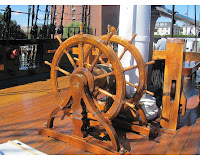 It is great that this old warship is kept around. It still is a commissioned ship in the US Navy, which means she could be called out to war, although as Mike, one of her crew members and our guide, mentioned, she would be too slow to get to the action and once there would surely lose. Currently she has won all 33 battles she has been in.

It was an interesting tour and I'm glad that I had the opportunity to visit this piece of history.

Here I am about to board ship 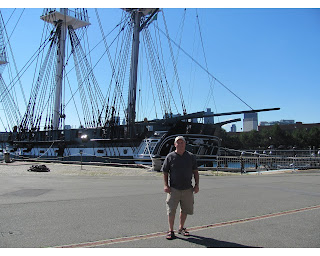 This is Mike, a member of the US Navy and our guide. He gave us an excellent tour. 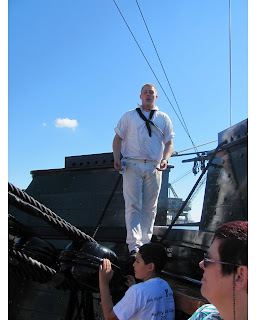 32 pound carronades which were on the top deck. She originally had 20 of these. 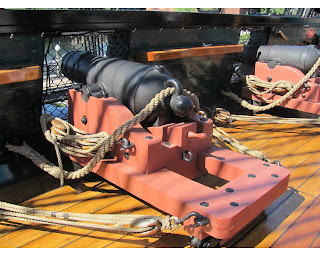 Here I am manning one of the 24 pound long guns. 30 of these were below.
It was crowded and I could not imagine the noise, smoke and chaos
of being on this deck in battle. 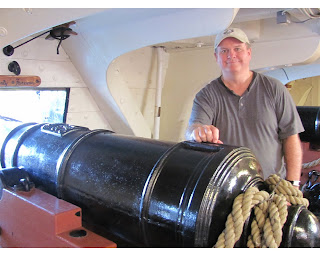 Just before going into battle, these pumps were manned and the deck flooded with water
to kill any sparks from the cannon fire. Sand was also thrown down to kill sparks
and give the men some traction. 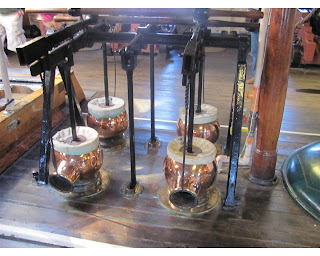 The crews sleeping quarters. It was cramped with very low ceilings. 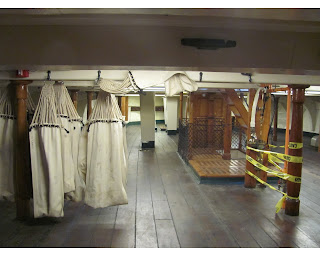 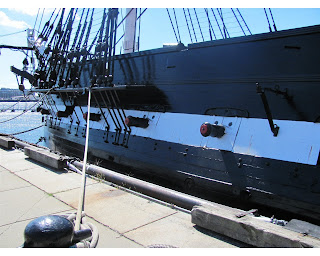