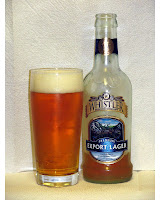 I have been starting to get into lagers lately and, when I saw one from Whistler B.C., I had to give it a try.

Whistler Export lager is brewed by Whistler Brewing Company, in where else ... Whistler, British Columbia. It wasn't always that way, though.

In 2001, an Australian, Bruce Dean, took a job in B.C. promoting Mike's Hard Lemonade and Mission Hill wines. He says, "Frankly, I'm not a wine guy and I never really got used to swirl and spit. Gulp and swallow has more appeal to an Australian than swirl and spit."

But he fell in love with British Columbia.

Wing Co., Bowen Island Brewing Co. and Whistler Brewing Co., all B.C. companies. Being a former marketing executive at Gillette, Dean suggested that they piggyback on the worldwide fame the Whistler name holds and go international with their beer.

Big Rock decided instead to sell the company so in 2005, Dean rounded up some locals.

A few years ago, Teena and I spent part of our summer vacation in Whistler, one of the most beautiful places I have ever visited. We spent our anniversary climbing a glacier on Whistler Mountain. That's us in the picture below right after that climb.

In December 2009, they moved their brewery to Whistler and now brew 10 times the beer done when they originally opened, and ship their beer to Japan, and now to Ontario. 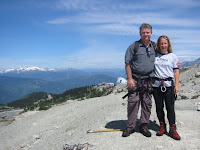 The beer pours a golden colour with a slight sourness to the nose. A head formed but quickly disappeared. There was plenty of carbonation when sipped. The beer is lightly flavoured, with a slight sour note on the finish. It does finish cleanly as the taste rapidly leaves.

Overall not a great beer. Those that don't like an overpowering tasting beer would enjoy this but my beer needs a full taste. This one just doesn't have it.
Posted by Swordsman at 20:49

Ironically, I bought this for the first time last week myself, having tried it at a frined's.
While I don't have one in front of me at the moment to reflect upon (more's the pity), I do recall it being rather rich with a burnt carmel after taste and a slight sweetness. It delightfully reminded me of a mild Innis and Gunn.
I will have to take your review into question when I have another one tonight, but the first 3 have gone down with out much struggle.

It is not hard to drink. My 6 pack is gone. I did not find it a very flavourful beer but you are right, it beats Kokanee.........and most Big Brewery lagers too.