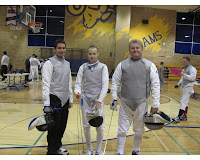 Today was a team competition at Ryerson University called Foiling Around, that has been going on for over a decade . Cute name and interesting concept.

What happens is they take the best fencers in the room and make them team captains. The rest of the fencers are then evenly divided into two groups, the next best fencers and the rest. This being only my third foil tournament, I was in the last group.

The captains then draw names. One from from one group and one more from the other to create a team of three. My captain was Elenore who has been fencing for 5 years. Also on our team was Steve who has fenced for a year, but never entered a competition before.

Nine teams in all went into action.

I realized very early what excellent fencers I was teamed with. All day I would see Elenore do a move and say to myself or Steve, "I'd love to learn that one." Usually Steve would nod 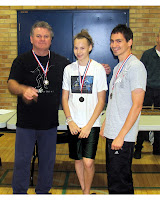 Instead of the usual team concept, this tournament is the first team to win 5 matches wins the bout. Twice with the score tied 4-4, Steve pulled off the final victory.

We won the first match of the day, lost the next and went undefeated after that, ending up the day with a 7-1 record. Speaking of going undefeated, Elenore did not lose a match all day. She was saying that 2 years before she only lost one match all day but her team never won a medal.

This year was different.

We ended the day tied for first place and even though we had beat that team lost on the first tiebreaker which was bout loses, we ended up with Silver! Not too shabby.

Oh and my game. I did not win much but had some very long bouts. It was said my job was not to win but to just wear down the competition. I did get better as the day went on and gave some good fencers rough times near the end. My proudest moment was taking a win to put us at 4-4, allowing Steve to get to the final match to take the win.

It was a fun day with lots of fencing. Coming home with a Silver sure was icing on the cake.

The awards. Winner gets their names placed on an engraved plaque on the trophy od crossed swords. Top 3 positions get medals and for 4th place, each gets a loaf of bread, a tournament tradition. As many fencers are in University on tight budgets, the bread is an appreciated prize. Me, I like my medal. 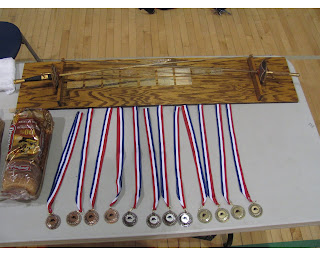