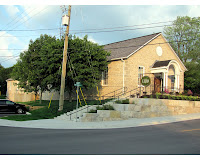 On Tuesday, Teena and I went for a drive north of Waterloo and along the way ended up in Elora, a picturesque little town sitting on a gorge.

An old mill sits at the waterfall and it's enjoyable to sit on the balcony over the falls and have a drink.

Teena wrote about our time in Elora and our hike down the gorge here.

When we parked on the south side of the bridge we noticed the LCBO. It was in an old building which we guessed to be either an old school, old church or old town hall.

Wrong on all counts.

There was a historical plaque out front proclaiming the building a National Historic Site. Very cool. Built in 1865, it was a drill shed used to train militia and is considered the oldest stone built drill shed still remaining in Canada.

Elora Drill Shed sits in a prominent position above 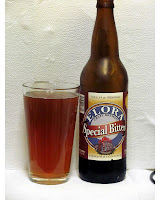 the Elora Gorge and Grand River. It represents the early phase of drill hall construction in Canada. It was built by British authorities in response to turbulent times in the United States. In the mid 1860s Britain feared British North America would be impacted by the Civil War to the south. Equally they were wary of anti-British sentiment from Irish settlers in America opposed to British rule in Ireland who were willing to carry that fight across the Atlantic. Britain's (soon to be Canada's) fears proved justified when in short order, 1866, Fenians crossed the border from the States to raid. Local militia trained at the Elora Drill Shed were amongst those to fight off the raiders. Over the years the hall has been a favoured venue in the community for theatre, meetings, concerts and parties. The drill hall is now leased to the LCBO as a liquor store. It was designated a national historic site in 1989 and plaqued by the Historic Sites and Monuments Board of Canada in 2002. 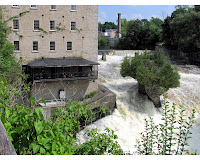 We went inside and I purchased a couple Elora Special Bitter. Elora used to have its own brewery up till the early 2000s when it was bought by Traflagar Ales and Meads. The beer poured amber in colour, with no head. After sipping, there were no lacings at all remaining on the glass. Very very little carbonation to this ale. It tasted somewhat watery and overall I was not impressed.

If you are looking for a place to go for the day, I would recommend a trip north of Waterloo. Be sure to take in St Jacobs, the West Montrose covered bridge and, of course, Elora. It's a great day out.
Posted by Swordsman at 15:55